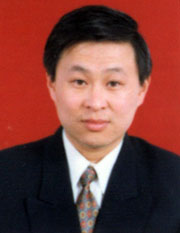 On December 28, 2005, the whole family of Mr. Yang Xiaojie requested the Hebei Provincial No. 4 Prison (a.k.a. Beijiao Prison) in Shijiazhuang City and the Hebei Provincial Prison Management Bureau to release Mr. Yang Xiaojie. After repeated consultations, they finally agreed to release Mr. Yang. By that time he was on the verge of death and the No. 4 Prison could not cover it up any more. Upon release, Mr. Yang's family took him to see the doctor, and the first thing the doctor said was, "Why are you bringing a person here like this? It's too late!" 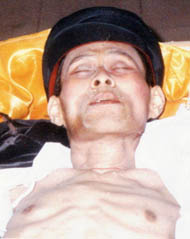 Photo of Yang Xiaojie after persecution to death 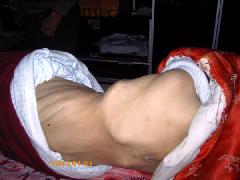 The state of Mr. Yang's body when he was released on bail for medical treatment

Practitioner Yang Xiaojie of Shijiazhuang City died on January 26, 2006, at 11:15 a.m. The Beijiao Prison guards inflicted serious bodily injury that resulted in Mr. Yang's death. Mr. Yang Xiaojie was discharged from public employment on July 20, 1999, for his steadfast belief in the principles of "Truthfulness, Compassion and Forbearance." From then on he was detained and arrested and his house was ransacked many times. Later, he was sentenced to 11 years of imprisonment, where he remained until he was tortured to death. His wife Ms. Liu Runling was also sentenced to 11 years in jail and has been tortured at the Hebei Provincial Women's Prison.

Mr. Yang Xiaojie was 1.75 meters tall and weighed more than 70 kilos. However, when he came back home from the prison, he was only about 35 kilos. He was skin and bones, and he did not even have the strength to talk. He had phlegm in his trachea and hydrocele in his chest. His breathing was not ragged, and he slept most of the time. When other people helped him to sit up or turn over, he would feel severe spinal pain.

The prison sent him to an oncology specialist for check up, even though they knew Mr. Yang was dying from torture and resulting cancer. Even on the "certificate of release for bail," it was clearly written that he was suffering from mediastinum cancer and bone cancer. However, they still purposely wanted to cover up, delay and prevent Mr. Yang Xiaojie from being released on bail for medical treatment. Why was this the case?

Mr. Yang Xiaojie, 40 years old, lived at 5-5-303, No. 95 Pingnan Dajie South, Shijiazhuang City, which has been dismantled. He worked at the Northern Office of the China Youth Daily. He began to practice Falun Gong in 1995. After starting the practice, he noticed great changes in his physical and mental well-being. He was a person of hardworking, simple and strong character. He was intelligent, showed filial respect to his parents and was ready and willing to help others. Thus, he was also warmly regarded by his neighbors. Before 1999, he voluntarily assisted other practitioners at the local practice site and gave them Falun Gong books. He feared no hardships or difficulties. Moreover, his family lived a happy and harmonious life.

From the onset of the violence against "Truthfulness, Compassion, Forbearance" by the Chinese Communist Party, Mr. Yang Xiaojie's family has been in turmoil and experienced endless suffering. On July 20, 1999, Mr. Yang Xiaojie exercised his legal right to go to Beijing to appeal and clarify the truth about Falun Gong. When he came back, he was detained by the Xiumen Police Sub-station in Shijiazhuang City. On October 10, 1999, his workplace was forced to discharge him from employment. On October 31, 1999, Mr. Yang Xiaojie was detained for two days for going to Beijing to appeal on behalf of Falun Gong. Mr. Yang and his wife were then arrested and taken to Yuanshi County Detention Center and detained for 15 days. After that policeman Fang Liang and political commissar Li Shaojie from the Penghoujie Police Sub-station escorted them to the Qiaodong District Detention Center and detained them for 6 days.

In the evening of April 12, 2000, policeman Fang Liang tricked Mr. Yang Xiaojie into going to the Penghoujie Sub-district Office in the name of asking him for help with a personal affair. Mr. Yang was detained for one day, and after being released, he was placed under surveillance day and night. In the morning of July 18, 2000, the policemen from the Penghoujie Police Sub-station and members of joint defense forces arrested Mr. Yang Xiaojie, his wife Liu Runling and 11-year-old Wenjing to Penghoujie Police Sub-station to prevent them from going to Beijing to appeal. At about 7 p.m., the family of three was taken to a room on the fourth floor of the guesthouse of the Machine Tool Factory, where they were forced to go through brainwashing. On July 20, policeman Fang Jie from the Penghoujie Police Sub-station arrested Mr. Yang and took him to the Shijiazhuang City No. 1 Detention Center to undergo brainwashing. He was locked up at the No. 116 cell for more than 30 days. Since Mr. Yang Xiaojie was steadfast in cultivating "Truthfulness, Compassion, Forbearance", policeman Fang Liang and Director Zhao of the Penghoujie Sub-district Office threatened to sentence Mr. Yang to forced labor in an attempt to extort ten thousand yuan bail from his family, but their attempt failed. He was detained for 2 days, and he was released after his wife paid the bail to take him home.

On September 29, 2000, in order to escape further persecution, Mr. Yang Xiaojie and wife Ms. Liu Runling were forced to leave home and go from place to place. In October 2000, the couple was placed on the wanted list. In the evening of September 28, both of them were arrested at the Kaida Sub-district of Shijiazhuang City. They were badly beaten up and arrested on the scene. Ms. Liu Runling was taken to the Penghoujie Police Sub-station and then locked up at the No. 1 Detention Center. Among other abuses endured, Mr. Yang Xiaojie was forced to sit on a metal chair non-stop for 7 days and 7 nights. Later, he was sent to the No. 1 Detention Center in the Yuanshi County Detention Center, the city's Dongfeng Road Detention Center, and the city's No. 2 Detention Center.

On February 10, 2002, with the approval of the Qiaoxi District Procuratorate of Shijiazhuang City, Mr. Yang Xiaojie and his wife were arrested. On September 9, 2002, the Qiaoxi District Court sentenced the couple to each serve 11-year terms of imprisonment for simply believing in Falun Gong and speaking the truth.

From July 15, 2003 to December 28, 2005, Mr. Yang Xiaojie was held at Section 11 of Beijiao Prison, Shijiazhuang City, which was formerly the No. 4 Prison of Hebei Province. His wife Ms. Liu Runling was locked up at Section 1 of the Hebei Provincial Women's Prison.

The Beijiao Prison put Mr. Yang under strict control year round. He was frequently locked up in confinement, suffered from physical punishment, was verbally abused, and subjected to sleep deprivation. The prison authorities put pressure on him continuously to force him to renounce Falun Gong. This placed him under great duress for a long period of time. Once the police deprived him of sleep for 30 days. Mr. Yang was also kept in confinement three times. Since he had no other recourse to protest, he went on hunger strike twice for about one month. The prison guards also incited inmates to beat and torture him.

Between September and December of 2003, Wang Guobin, the Director of the Prison's Education Section, ordered criminal Fan Jiangshan to punch and kick Mr. Yang Xiaojie. As a result, he lost two teeth and suffered from a stomach pain. Later on, the prison guards handcuffed and shackled him. Criminal Fan Jiangshan was rewarded with a sentence reduction for persecuting Falun Gong practitioners.

On the evening of June 2, 2004, Mr. Yang Xiaojie was thrown into solitary confinement for refusing to watch brainwashing videos. He went on a hunger strike with no food and no water to protest the persecution. In the morning of June 6, Wang Guobin, Head of the Prison's Education Section, conducted forced feeding on Mr. Yang. The perpetrators sent down a tube into Mr. Yang's nose and said it was too thin. They pulled it out and sent down another, thicker tube. Under the direction of Wang Guobin, the prison doctor poured highly concentrated salt water down the tube and the salt water instantly filled his chest, his nasal cavity and mouth. The sudden and intense pain made Mr. Yang suddenly sit up and pull out the tube. In the three days after being force-fed, Mr. Yang coughed repeatedly, spat out blood and ran a high fever.

Mr. Yang Xiaojie suffered from spinal pain for more than a year and lay immobile in bed for more than three months. He was extremely thin and weak. However, under such circumstances the prison authorities used "refusing to renounce Falun Gong" as an excuse to forbid Mr. Yang's family to visit him, tried very hard to cover up Mr. Yang's actual health and put up innumerable obstacles to prevent the posting of bail for his release and medical treatment.

We have called on the World Organization to Investigate the Persecution of Falun Gong (WOIPFG) to investigate the murder case of Mr. Yang Xiaojie from Shijiazhuang City, Hebei Province and especially look into the roles of Chen Ning, Head of the No. 11 Prison Section of Beijiao Prison, Shijiazhuang City, Chen Xinguo, leading member of the No. 11 Prison Section, Wang Guobin, Head of the prison's Education Section, the related leaders of the Beijiao Prison of Shijiazhuang City, and hold the related leaders of the Hebei Prison Management Bureau responsible for the death of Mr. Yang Xiaojie.

“My Experience Clarifying the Truth in Hong Kong”