(Clearwisdom.net) Last year, young Falun Dafa practitioners in Sydney Australia conducted a car tour to Melbourne to clarify the truth in October during the school vacation. More recently, between January 16 and 20, 2006, fifteen young practitioners from 12 schools in Sydney and Canberra held a second car tour that drove 150 kilometers to Adelaide during summer vacation. They clarified the truth along the way in 11 cities, introduced the beauty of Falun Dafa and exposed the Communist Party's brutal persecution of Falun Gong in China.

In the 11 cities, the young practitioners accepted interviews from five TV stations, one radio station, and broadcasted at three ABC Radio Stations. Ten newspapers interviewed the participants and two newspapers published articles before the car tour arrived. At the largest inland city, Maroochydore, the largest TV station, Channel 9, broadcasted news the night before the car tour arrived, and the reporter interviewed the young practitioners who were doing exercises on the bank of a river the next morning. 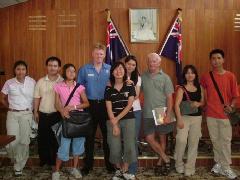 Clarifying the truth at city hall

During the tour, six mayors, deputy mayors or city council members met with the young practitioners, listened to the truth clarification and accepted the printed materials. The mayors and council members also signed their names on the form that the practitioners designed to call for Foreign Minister Downer to stop signing the certificates to restrict Falun Gong practitioners from displaying banners in front of the Chinese Embassy. Some mayors and council members also left blank spaces for their colleagues to sign the petition. They expressed their disproval of Downer's violation of the spirit of Australia, which is to be kind, just and never surrender to foreign pressure. The practitioners also met some provincial representatives. After learning the truth, they said they understood and supported the Falun Gong practitioners.

The young practitioners also donated books to the libraries along the route to let more people have a chance to learn the truth about Falun Dafa. 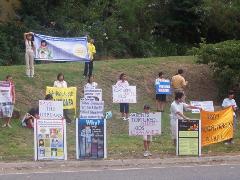 On a Friday morning, the car tour went to Downer's District Office in the suburb of Adelaide City. The students wanted to present a letter to him. The letter explained the purpose of the car tour and that his continuing to sign the monthly certificates restricting practitioners' protests resulted in more miserable conditions for orphans in China. They hoped Mr. Downer would stop signing the certificates immediately. Outside the district office, the young practitioners unfurled banners to protest. The banners read, "Parents tortured, killed, children orphaned", "Freedom of Speech restricted" and others.

It was during the morning rush hour. Many people honked and gave a thumbs-up to express their support for Falun Gong practitioners. Though Mr. Downer was not in his office, his secretary accepted the letter and said she would convey it to him. The young practitioners later went to the building of the Ministry of Foreign Affairs to protest the harm Downer's certificates have done to Falun Gong practitioners. Seeing so many teenagers outside of the building, many people came to ask for more information, took truth clarification materials and expressed their concern about the persecution of Falun Gong in China.