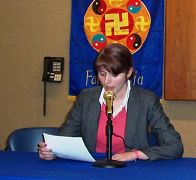 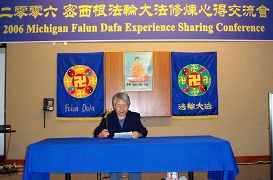 Mr. Mu shared his experience of passing through sickness karma. He did the three things well and eliminated the karma with solid belief in Dafa and Master.

A practitioner who migrated from Russia kept clarifying the truth and passing out copies of the Nine Commentaries on the Communist Party to Chinese people. Recently, he went back to Russia, and passed out the Nine Commentaries to many Russians and Chinese people there. In a Russian city, he was interfered with by a policeman who didn't know the truth, but he clarified the truth to the policeman, and spread the Fa.

A 16-year old high school student who obtained the Fa with her mother one year ago, shared her experience of broadcasting the Nine Commentaries and convincing Chinese people to quit the party. Some Chinese people who don't know the truth cursed her, but she still clarified the truth to them. Also, during this process, she got rid of the attachment to hearing only complimentary things said about her.

Mr. Li from Windsor said that his 80-year old father was interfered with by evil in other dimensions and had very serious sickness. He told his father to repeat "Falun Dafa is good"; "Truthfulness-Compassion-Forbearance is good"; "Master Li is good". The evil was eliminated and his father was healed. Now his father reads Zhuan Falun with another old gentleman every day.

Mrs. Zhou from Ohio shared her experience of making phone calls to China and convincing Chinese people to quit the CCP. At the beginning, she said, she was very nervous. But with a heart of saving people, she is doing better and better, and many people quitted the party and have been saved due to her effort.

“Practitioner Mr. Zhang Yan Was Picked Up by Authorities While Traveling on Business in Shenzhen City, Guangdong Province”