Minghui has verified 122 death cases to between January and September 2006.

Mr. Xin Minduo, age 33, tortured to death at Nanshan Prison in Jinzhou City and His Body Cremated Against Family Will

Mr. Xin Minduo, 33 years old, was a backbone technician at Liaohe Oilfield Material Exploration Company. He was sentenced to three years of forced labor in 2001 and was held in Panjin City Forced Labor Camp. He was again arrested by officers Xu Hao, Huang Haiou and others from the Panjin Police Department on August 3, 2005. The Xinglongtai District Court in Panjin City sentenced him to a 13-year prison term, and sent him to Nanshan Prison in Jinzhou City.

In mid-June, 2006, four people from Nanshan Prison in Jinzhou suddenly came to the home of Mr. Xin Minduo's father's and told his family, "Mr. Xin Minduo is on a hunger strike. His term will be extended or he will be transferred to Shenyang if he continues with the hunger strike..."

Between July and August 2006, Xin Minduo's family contacted Nanshan Prison many times, and they were given permission for a family visit each time. However, each time they arrived at Nanshan Prison, they were told that they could not visit him after all.

Xin Minduo's father waited outside the prison but he wasn't allowed to see his son. Half of his teeth had fallen out by this time from anxiety, and his eyesight became blurry. He not only couldn't see his son, but was also threatened and insulted by the prison guards. One guard yelled at him, saying, "Your family wrote threatening letters and exposed us to the world. You offended our leader. It seems that you are somebody. Keep this up and we will not release him even he dies. It's no use no matter whom you talk to, even if you talk to the State Department."

Xin Minduo's family waited outside of Nanshan Prison on September 1, 2006 until 4:30 p.m., but they weren't given permission to meet with him. So they went back home. That night, Mr. Xin's father received a call from the prison. He was asked to come to the prison, but was told not to inform Mr. Xin's mother and sister.

Later it became known that Xin Minduo died on the night of September 1, 2006. At 6:00 a.m. on September 3, Mr. Xin Minduo was cremated by guards of Nanshan Prison in Jinzhou City

The CCP has been brutally murdering Falun Gong practitioners in the past seven years while strictly blocking information channels as it kills innocent people to cover up its crimes. Among the cases verified in September 2006, many were tortured and killed for clarifying the truth.

Ms. Chen Suxiang, 50, lived in Dongyaoxia Village, Kaiping District, Tangshan City. After practicing Falun Gong, she became very healthy, and was a good person who was well respected by the people in her village. In order to help more people see the truth about the Communist Party, and to tell them that Falun Dafa is good, she passed out truth clarifying materials in the Qianquzhuang Neighborhood Committee around noon on September 12, 2006. She was arrested and beaten by the Qianquzhuang Security head Li Zhiqiang and others, and she was savagely beaten for a whole day and night, and collapsed on the floor. Her mother and husband went to the Kaiping Police Station in the morning the next day, September 13, to request her release. They saw that Chen Suxiang wore handcuffs and ankle shackles, and was mentally traumatized. She told her family how she was being brutally beaten. Her mother saw the injuries on her lower back and behind her ears. Her eyes were bruised and swollen, and there were bruises on her legs. Chen Suxiang said around 3:00 p.m., on September 13 that she needed to use the toilet. She started swaying when she walked, and had to be helped by two female police officers to reach the toilet. They waited a long time, and she never walked out. They entered the bathroom and found that she was in a coma. By the time they sent her to Jingezhuang Mine Hospital, she had already died. 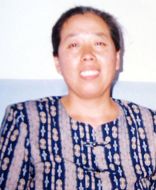 Mr. Zhang Jieping, 56, was a retired worker from Jialing Plant in Shapingba District, Chongqing City. In late September 2001, policemen from the District Police Department arrested him when he was "clarifying the facts" to people in the plant, and later they illegally searched his home. He was sentenced to a two-year forced labor term and was kept at the Xishanping Forced Labor Camp in Chongqing City. On April 15, 2006, Mr. Zhang Jieping was arrested by policeman Deng Bin of Jingkou Town when Zhang was explaining the facts about Falun Gong to a group of migrant workers at a construction site at Yuanzuqiao, Jingkou Town. He was sent to the Baihelin Detention Center of Shapingba District in Chongqing City. His family didn't know where he was at the time. Eight days later, some police ransacked Zhang Jieping's home but they refused to present warrant. They took out a detention warrant and asked Zhang Jieping's family to sign it, and the family refused. So the police forged Zhang Jieping's family's signature on the warrant. On the morning of August 29, Zhang Jieping's son went to the detention center to give money to the authorities, and he saw his father at the facility clinic. A nearly unrecognizable Zhang Jieping, all skin and bones, was unable to speak and needed constant infusions. Blood was visible in his urine led out through a tube. On the same day, while wearing shackles around his ankles, he was first sent to the No.1 People's Hospital in Shapingba District for emergency treatment and then transferred to Shapingba District Hospital. Zhang died on the morning of September 5.

Ms. Luo Qingshu was in her 70s and she was a retiree from the Geology and Mineral Bureau of Gansu Province. When clarifying the truth to people on February 22, 2005, Luo Qingshu was arrested by officers from Tuanjiexincun Police Station in Lanzhou City. Two police officers and Lui Jianya from Luo Qingshu's work unit sent her to Gongjiawan Brainwashing Class in Lanzhou City on March 8. The guards coerced her to write guarantee statements; they slapped her face until her face was severely bruised. They put her in a dark and damp detention room, where she was forced to sleep on the icy cement floor for more than three months. During this time, Luo Qingshu was hung up by her cuffed hands, stand day and night until her feet were swollen she could not wear shoes. Her legs swelled up and she could not take off her sweatpants. Her skin was transparent and she could not bend her legs. She could not sit down, and huge cracks appeared on her calves and inner thighs. Her hands swelled up like buns and she could not bend her fingers. It was difficult for her to eat. Once, she was hung up for 12 days and 12 nights, but she still refused to write the guarantee statements. She passed away on October 17, 2005. The Geology and Mineral Bureau took 10,000 Yuan from her paychecks in April and May 2005, and they deducted another 12,000 Yuan in July and August 2005. Because Luo Qingshu's salary was not enough, they deducted some money from her daughter's salary.