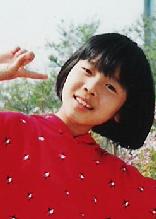 (Clearwisdom.net) Ma Fan is a happy and charming nine-year-old girl who, until recently, was always smiling. However, she has not smiled much since March of 2005, because now she can only be with her parents in her dreams. In March, her parents were arrested by police for helping a friend named Gao Rongrong get out of prison. Gao Rongrong's face was disfigured during her detention in prison for her belief in "Truth, Compassion and Forbearance."

"Truth, Compassion and Forbearance are good. Falun Dafa is good!" Ma Fan repeats this sentence. Her mother used to suffer from stomach pain, headaches, and postpartum back pain. All of these disappeared after she started practicing Falun Gong.

In July of 1999, the large-scale persecution of Falun Gong began. On October 13, 2000, four-year-old Ma Fan and her mom went to appeal in Beijing. They consequently were sent to Longshan detention center in Shenyang. The police there were very vicious. Little Ma Fan was terrified when they body-searched her. Several days later her grandma took her home but her mom was still detained there until nearly two years later.

Ma Fan found that her mom had become skinny and pale. She also lost lots of hair. From the adults' conversation, Ma Fan learned that the police ruthlessly tortured her mom in order to force her to give up her beliefs. The torture methods included being forced to stand in the corner in a certain position, to kneel down, squat on a stool, force-feeding, sleep deprivation for one week, and being sent to a male labor camp (Zhangshi Labor Camp). After practicing Falun Gong, her mom became more kind and patient. She was always ready to help others. The neighbors all praised her. A grandfather patted Ma Fan's head and sighed, "No place for justice."

Photo: Her mom Zhang Lirong was tortured in Shenyang Longshan Labor Camp for her belief. This is a re-enactment of "force-feeding"

Although confused, Ma Fan was happy that her mom was finally back home. However, her happiness did not last long. Her dad clarified the truth to passengers when he worked as a taxi driver. As a result, he was sent to the Shenyang City's Zhangshi Labor Camp in September, 2002 when she was just in first grade.

Since starting practicing Falun Gong in 2001, her dad became very kind to others. He would help his wife to do housework and clean the public stairs. He would help seniors and children in his work. Several times he found cell phones worth more than one thousand yuan and he returned them. When people gave him money to thank him, he said, "I practice Falun Gong. I was taught to always think of others and be kind. How can I accept your money?" They were very touched, marveling that, "such a good person truly exists in today's society."

However, this good person was detained for over one year for speaking the truth. This March, Ma Fan's parents were once again taken away and sentenced to labor camps for three years. Her mom is detained at the 1st division of Masanjia labor camp in Liaoning province. Her dad is detained at the 1st division of the Shenxin Forced Labor Camp. Now she has to live with her grandmother who is over sixty years old and in poor health. This summer, Ma Fan heard that the friend, Gao Rongrong, who her parents helped to rescue and managed to get out of prison, died mysteriously in an emergency room under police surveillance. Now she is even more worried about her parents' safety.

Little Ma Fan always dreams about her parents. In handwork art class, she made a poster. She said, "In my dream, my parents are sitting on the moon boat. They believe in Truth, Compassion and Forbearance. Bad people cannot reach them. Thus my parents will never leave me."