(Clearwisdom.net) In order to promote the rescue of the orphaned children of Falun Gong practitioners cruelly persecuted to death by the Chinese Communist Party, UK Falun Gong practitioners held an activity on Prince's Street on August 7th, 2005, the opening day of the Edinburgh International Art Festival. Practitioners used various means including music, singing, dances, demonstrations of Falun Gong exercises, a photo exhibition and petition signature collection, to let people know about the persecution and to appeal for people's support. Many onlookers were deeply shocked when they learned about the situation in China and offered their support.

Numerous tourists were deeply impressed by the dance, "Falun Dafa is good" and the lion and dragon dances performed by Falun Gong practitioners during the parade. They were also very glad to enjoy the open-air concert conducted by practitioners.

A banner in the background was very eye-catching and it read, "Rescue Orphans of Murder & Torture Victims". Several display boards were set up besides the stage, which told stories: A little girl went home after school, but her home was sealed up and she became homeless. (Her parents were all arrested and detained by police because they practice Falun Gong. A little girl whose father was tortured to death for his practice of Falun Gong, holds her father's photo and says, "I want my daddy!" A little boy who is locked with his mother in a cell grasps the iron bars and looks very confused. A little girl in rags stands on a street with her bare feet... These display boards already deeply touched people's hearts. Visitors all showed their expression of sympathy. On the information desk some materials were displayed to introduce Falun Gong and expose the facts of the persecution. There were also some petition forms calling for the rescue of children orphaned in the persecution of Falun gong. Before the concert began, people already started signing the petition. 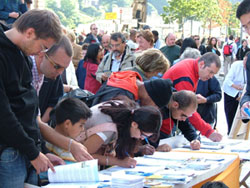 Many spectators signed the petition with tears filling their eyes. Sometimes, people lined up in a queue to sign the petition.

Most of the dances, songs and music were composed by UK Falun Gong practitioners. The female chorus, "Stories in the Paintings" was composed based on the paintings described above. Accompanied with the reciting of a poem, the stories depicted in the paintings unfolded in front of the audience. The solo, "Rainbow in my Dream" described the dream of a little girl who was incarcerated. In her dream, her mother stood on the rainbow and her back was shown in colorful sunlight. The girl wishes the beautiful rainbow will always stay in the human world and guide people to search for their wonderful future. A song sung by a man and a woman, "Flower of Spring" expressed a mother's thoughts about her son who was imprisoned for cultivating Truthfulness, Compassion and Forbearance. An Argentine practitioner performed a dance to the solo, "Thinking of My Son". Her mother, a vocalist from Argentina, performed the song, "Dove High Over the Storm". Practitioners also performed the music, "Pudu", "Heaven's Gate Opens" as well as the "Fan Dance," "Lotus Flower Dance" and "Colorful Umbrella Dance." They also demonstrated the Falun Gong exercises.

At the same time, some practitioners distributed flyers and collected signatures to support the rescue effort. Many spectators signed the petition with tears in their eyes. Sometimes, people even lined up in queue to sign the petition. Over the two-hour performance, nearly 1000 signatures were collected.

There were quite a number of Chinese students among the tourists. They silently watched the performances and the display boards. Because of the Chinese Communist Party's hate-propaganda, they were so fearful that they dared not to sign the petition. Their eyes, however, expressed their sympathy.

A young student girl from Mainland China told a practitioner, "My parents are both cadres at a certain level. They all know the truth. Talking about the persecution, they know more than you do. They said that they knew the "Tiananmen Square Self-Immolation" was staged without even watching it. This is not the first time such a thing has happened in our history." She also said, "You are working so hard. You will definitely succeed. I will tell my friends what I saw here."

“Western Practitioner: How I Broke Through Sickness Karma”