San Francisco: Practitioners Call on Chinese Communist Officials to Regain Their Conscience and Stop Assisting the Party to Do Evil (Photos)

(Clearwisdom.net) In response to former Chinese officials Mr. Chen Yonglin and Mr. Hao Fengjun's open renunciation of the Chinese Communist Party (CCP) and revelation of the CCP regime's persecution of Falun Gong, on June 10, 2005, practitioners attended a press conference in front of the Chinese Consulate in San Francisco. Practitioners voiced their support to the defectors' righteous actions. They also exposed the evil conduct of the CCP with their personal experiences. In the meanwhile, practitioners called upon other CCP officials including officials in the Chinese Consulate in San Francisco to renounce the party and stop acting as accomplices of the CCP.

Ms. Ma Lijuan, a San Francisco resident said that in 1999, Jiang Zemin and the CCP began the official suppression of Falun Gong. Since she practiced Falun Gong and knew that the practice is really good, she went back to China in 2000 and went to the Appeal Office in Beijing - a place established by the government to listen to public opinions. She planned to explain the real situation about Falun Gong to the government and hope the government to stop the persecution of Falun Gong. She said, "Out of my expectation, as soon as I arrived at the appeal office, I was arrested and locked up in a detention center, where no food or water was provided. Even worse, I was not allowed to use the bathroom. In China, the mistreatment I received was not as serious as other other Falun Gong practitioners. I witnessed how Mr. Zhao Ming who went back from Ireland was beaten by the police officers. I also witnessed other practitioners being tortured."

Falun Gong practitioner Mr. Pan Jun, a San Francisco resident, attended the press conference. He said that the reason he came here was to use his own experience to expose CCP oppression of overseas Falun Gong practitioners. He introduced that on October 22, 2000, when he and other practitioners were practicing Falun Gong exercises in the Garden Corner Park in San Francisco's Chinatown, he was beaten by a group of people whom he was not acquainted with. At that time, Mr. Pan followed Falun Gong's teaching of "not fighting back when being punched or insulted", he did not fight back. As a result, his eyeglasses were broken, his clothes were torn into pieces and his nose was bleeding. Several other practitioners were also beaten and injured. 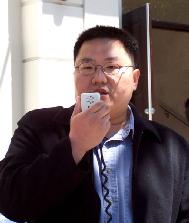 Mr. Pan Jun bearing witness to the CCP's extension of its persecution of Falun Gong to overseas

Pan Jun pointed out that the reason of being beaten up was because in September 2000, the then-President of China, Jiang Zemin, said in an internal meeting that fighting against Falun Gong overseas should be emphasized. Thus, in addition to San Francisco, attack and harassment against Falun Gong practitioners took place in Chicago, New York, Canada and Australia. For instance, some practitioners' car windshields were broken, their tires were punctured, their phone calls were monitored and their apartments were broken into.

Evil will never prevail over justice

Practitioner Mr. Steve Ispas expressed that CCP sent out around 1000 spies in Australia. He believes that there are also CCP's spies in the U.S. In 2002, when Jiang Zemin visited Iceland, numerous Falun Gong practitioners from across the world were barred from boarding the Iceland airlines. It was the due to the CCP's manipulation through diplomatic means that Iceland government did such a thing. This also indicated that the CCP's spies collected overseas Falun Gong practitioners' names.

Steve pointed out that nonetheless, the evil will never be able to prevail over justice. At that time, 3000 Iceland people took the streets to appeal for Falun Gong. They also published advertisements in the major media in Iceland to openly apologize to Falun gong. Finally, the Iceland government relieved the ban, and practitioners were able to enter Iceland.

Steve also pointed out that CCP does not only suppress Falun Gong practitioners, but it also harasses American officials who support Falun Gong. For instance, in 2002, after learning about the CCP's brutal persecution of Falun Gong, San Francisco city council member Mr. Chris Daly initiated a resolution to condemn CCP and call for an end to the persecution. However, the Chinese Consulate in San Francisco used all possible means including phoning Daly to threaten him to prevent city council members to pass the resolution.

Steve expressed that this was only one example of the CCP's extension of the persecution against Falun Gong in other countries. Nevertheless, as people see more and more clearly its evil nature, they begin to stand up to oppose the regime. On October 4, 2004, the U.S. Congress unanimously passed House Resolution 304 to express the U.S. Congress's opinion regarding the CCP's suppression of Falun Gong in China and in the U.S. The resolution urged the Chinese government to immediately stop interfering in the exercise of religious and political freedoms within the United States, such as the right to practice Falun Gong, that are guaranteed by the United States Constitution; cease using the diplomatic missions in the United States to spread falsehoods about the nature of Falun Gong; and release from detention all prisoners of conscience, including practitioners of Falun Gong, who have been incarcerated in violation of their rights as expressed in the Constitution of the People's Republic of China.

CCP will be held accountable for all crimes it has committed against Chinese people. It would be wise to renounce the party as soon as possible.

Mr. Pan Jun said that on June 10 six years ago, a Gestapo-like organization, the 610 Office, was established in China. This organization has conducted various kinds of harassments and persecution against Falun Gong practitioners in all large and small cities in China and in countries outside China. As a result, at least 2,400 Falun Gong practitioners died in the persecution.

Pan expressed that each person, no matter what life path he takes, what position he holds in the society, he is going to face the trial of his conscience. This day should come soon. He said, "I hope more officials in the Chinese Consulate would bravely stand out, renounce the evil CCP and its related organizations. CCP will be held accountable for all crimes it has committed against Chinese people. It will be a wise act to renounce it as soon as possible."