(Clearwisdom.net) On May 21 and 22, 2005, many flowers and green plants were blooming in the Missouri Botanical Garden. A festival atmosphere with gong and drum playing filled the air in the garden as the annual Chinese Culture Days in St. Louis was held there. The garden director, organizers of the Chinese Culture Days and VIPs from the Chinese community gave speeches at the opening ceremony. The Mayor of St. Louis also dispatched a representative to thank the Chinese people for their contributions to the city of St. Louis.

Local Chinese organizations and a Chinese newspaper cooperated to hold the large activity. This year, the Falun Gong practitioners in St. Louis were also among the event's organizers. 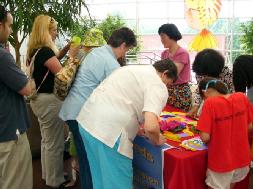 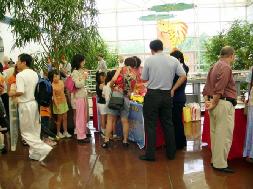 During the two-day activity, practitioners' paper lotus flowers were very popular. Western and Chinese visitors came to learn how to make paper lotus flowers one after another. People praised the lotus flowers and were moved by the facts about Falun Gong. Many wrote down web links and contact information to learn more about Falun Gong or the exercise practice sites. Many people initially felt it hard to believe that all Falun Gong books can be downloaded for free online and practitioners offer free teaching. 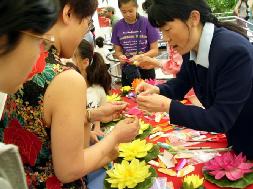 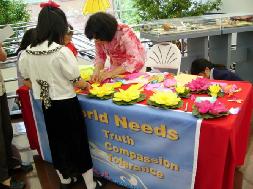 Chinese children were especially attracted by the beautiful lotus flowers. Some children came again on the second day. A few parents said that their children loved to fold them. Practitioners taught them how to do it and told them, "The Lotus grows out of the mud but is not contaminated. Falun Gong teaches people to be good following Truth, Compassion, Forbearance. As long as we strive hard to follow the teachings, we will have a pure heart like the lotus when we grow up." The children were glad to listen to the explanation. Some said, "Truth, Compassion, Forbearance". A 5-year-old boy told his sister after the lesson, "Tell the truth, be kind to others, and don't retaliate when treated unfairly." People smiled after listening to his words.

There were crowds of visitors around the practitioners' booth, and sometimes many waited behind. An event coordinator came over several times to try to move people along so as to not block the Falun Gong banner in front of the booth, but after a short while, people surrounded the booth again. Four practitioners continued teaching paper lotus folding and explaining the true story of Falun Gong for a whole day without stop. Two western practitioners stood outside among the crowd to explain the facts of Falun Gong. The event started at 10 a.m. and ended at 5 p.m.; however, even at 6 p.m. there were still visitors listening to the facts of Falun Gong and learning to fold paper lotus flowers.

Later one of the organizers said to a practitioner, "In this year's Chinese Culture Days, Falun Gong's booth was very successful."

Practitioners were delighted that so many people had come to know about Falun Gong.

“Re-enactment of Force-feeding at the Daqing Detention Center (Photos)”