(Clearwisdom.net) The 2005 Berlin Turnfest was held from May 14 to May 20 in Berlin during the Pfingsten Holiday season. The Turnfest attracted hundreds of thousands of athletics lovers from various countries around the world. At the invitation of the organizers, from May 15 to the 16th, German Falun Gong practitioners demonstrated the Falun Gong exercises, performed traditional Chinese dances, and participated in an onsite forum. 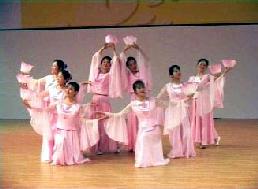 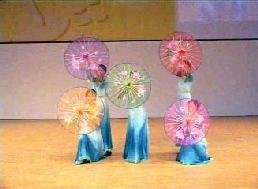 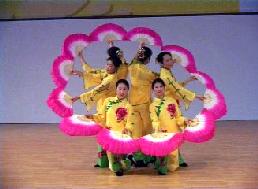 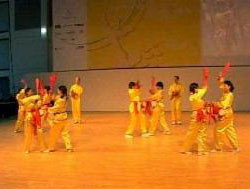 Among the practitioners choreographing the dance and participating in the performances were experienced professional dancing instructors, students, housewives and company managers. They practiced and rehearsed the performances in their spare time, aiming to show Falun Gong practitioners' gracefulness and goodness to the public in order to help them understand Falun Gong.

With the cheerful and relaxing melody playing, the practitioners' graceful dance and sweet and peaceful smiles, together with the classic long flowing costumes vividly depicted the beauty of celestial maidens and brought the audience into a realm of peace and purity.

It was a rare opportunity for many Europeans to see such a wonderful oriental artistic performance. Many people were so touched by the performance that they applauded spontaneously from time to time. For example, the first minutes of the performance of the "Lotus Dance" attracted two rounds of tumultuous applause.

The master of ceremonies for the practitioners' performance was eloquent and humorous, and he always commanded the audience's attention. He has practiced Falun Gong for many years and once participated in a peaceful petition in Tiananmen Square to call on the Chinese Communist regime to stop the persecution. When he introduced the Falun Gong exercises to the audience, many people could not help standing up to imitate the exercises along with the demonstration on the stage. Some even went up to the stage to learn the exercises from the practitioners directly. A six- or seven-year-old girl in a pink dress learned the five sets of exercises very seriously. A man dressed as a bear symbolizing Berlin's mascot even went up on the stage to imitate the practitioners practicing the exercises.

In a special forum called "Women and Sports," Ms. Xiong Wei, a practitioner in Germany who was imprisoned in China for two years because of her belief in Falun Gong, was interviewed by the festival host. After watching the wonderful artistic performances and the demonstration of the peaceful exercises, the audience was shocked and sad when they learned that people who practice Falun Gong in China are being brutally persecuted. One after another, they took the initiative to ask for more information about the persecution and exchanged their views on the situation. The atmosphere was very dynamic, and some people even stayed to talk with practitioners after the forum concluded.