Practitioners Mr. Deng Yulin and Ms. Chi Hongtao, husband and wife, live in the Niuxintai District of Benxi City in Liaoning Province. In 2004, they were secretly arrested in the so-called "9-18 Midnight Terror" planned by the 610 Office in Benxi City. They were then secretly sentenced to a nine-year jail term. Mr. Deng Yulin was placed in the Shenyang Prison Camp for continued torture. Ms. Chi Hongtao's arms were injured by the police at the time of her arrest, but the police refused to get her medical treatment. As a result, she could not take care of herself, and the Shenyang Women's Prison refused to accept her. Ms. Chi remains in the Bailou Detention Center, and there is no one at home to take care of her eleven-year-old child, Deng Zhongbo. 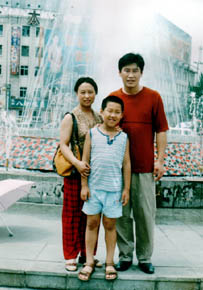 At midnight on September 18, 2004, the Benxi City 610 Office headed up public security, national security and city court bureau officers and dispatched more than one hundred police vehicles and five hundred police officers to execute their secret plan. Long in the planning, this was the so-called "9-18 Midnight Terror." According to Chen Zhongwei and Liu Shaoshi, the heads of the 610 Office, they had a blacklist of people to be arrested. They would strike at midnight, breaking into practitioners' homes. They arrested more than fifty practitioners, who were detained and sent to brainwashing centers.

After Jiang's regime started to illegally persecute Falun Gong, Mr. Deng Yulin and Ms. Chi Hongtao went to Beijing to appeal and clarify the truth many times. They were illegally detained several times and forced to leave their home to avoid further persecution. However, they never stopped exposing the facts of the persecution and the people that had committed such crimes. In this midnight plot, they used a fire truck with extendable ladders to get into the couple's residence. They surrounded their building and went upstairs to knock on the door. When the couple asked who was at the door, no one dared to answer. Instead, the police tried everything to force the door open but did not succeed.

While the police were trying to open the couple's door, Mr. Deng and Ms. Chi stood on the porch of their third floor residence and peacefully clarified the truth and exposed the evil acts of Jiang's regime to the onlookers.

After much effort, the police still could not open the door, and the fire truck's extension ladder was broken. The neighbors were awakened. As they silently listened and watched, some people started to say, "What's wrong with trying to become a good person? What's wrong with believing in Truth, Compassion, and Forbearance? And what mistakes have these Falun Gong practitioners committed? It is really messing up what is right and wrong! Why are such good people being subjected to this? Persecuting good people will bring evil consequences."

The standoff lasted for more than two hours before the police finally broke into their home by knocking through a brick wall. In order to resist the persecution, Mr. Deng and Ms. Chi jumped from the third floor, but a gang of police officers rushed to arrest them. Condemned by the surrounding people, the police handcuffed the couple and took them to the hospital. In the emergency room, police officer Du Dejun from the Cuidong Police Station used all his strength to hit Mr. Deng in the face and head. As a result, Deng Yulin's front teeth were knocked out, and he bled profusely. Officer Liu Shu, the deputy director of the police station, intentionally kicked Deng Yulin's broken legs. The couple was detained in the Bailou Detention Center for more than six months, and there was no one to take care of their eleven-year-old child.

Without informing the couple's family, the Pingshan District Court in Benxi City secretly sentenced each of them to a nine-year jail term. Mr. Deng Yulin was sent to Shenyang Prison Camp. Ms. Chi Hongtao's arms were badly injured, and she became unable to take care of herself. Shenyang Women's Prison refused to accept her despite the police's multiple attempts to send her to the prison. Currently Chi Hongtao is still detained in the Bailou Detention Center.

“Mother Forced to Watch Her Son Being Tortured in Shandong Province”