At 7 o'clock on May 1, 2005, the largest Turkish TV station "SHOWTV" broadcast a program introducing Falun Gong as a news item.

The program broadcast scenes of Falun Gong practitioners doing the exercises and a practitioner sharing her cultivation experience. The program was only broadcast for one day, but it aroused strong interest on a broad scale. Many people wanted to participate in a free Falun Gong Study Class. 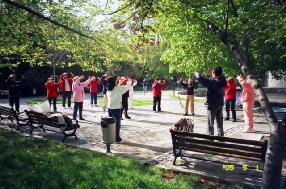 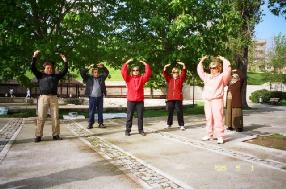 In the morning, the reporter from SHOWTV interviewed Falun Gong practitioners who were doing the exercises in a park and the program was broadcast during the evening news that same day. In the program, practitioners talked about practicing Falun Gong and introduced the five sets of exercises. One Turkish practitioner told them that she is fifty-five years old and took up the practice six months ago, but now she looks like a forty-five-year-old and is full of energy. She hopes that all the Turkish people can learn Falun Gong, and was glad that this program was to be broadcast on national TV. 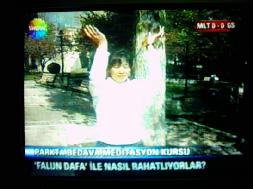 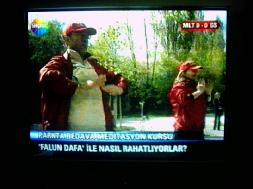 When the host earnestly read out the words, "Falun Dafa" in a resonant baritone to all Turkish people, many practitioners in different cities shed tears of happiness! Dafa has entered a new period of wide spread in Turkey. Accompanied by the music for the second set of the exercise and the host's reading, "Falun Dafa," in an instant, Falun Dafa entered all households in Turkey. In just several seconds, Dafa has become widely known. 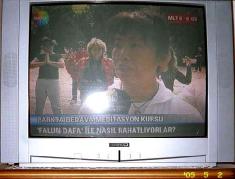 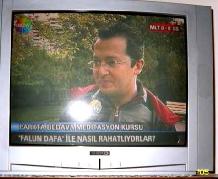 Practitioners are being interviewed, talking about the benefits of practicing Falun Dafa

A huge repercussion was created when this Falun Gong information was broadcast and practitioners suddenly received many telephone calls. They were immediately recognized by people on the street: "I saw you on TV yesterday evening. Falun Gong. Very good." They all said that they will go to the free Falun Gong classes.

When the Falun Dafa program was broadcast, the peaceful and harmonious energy field was felt even on TV and deeply touched people's hearts. People want to be healthy both physically and mentally. Falun Dafa brings a piece of serenity to this society that is full of anxiety and competition. People are awakening one after another, just like travelers seeing a beautiful oasis while traveling in the desert.

“Seventeen Practitioners from Beijing, Jiangxi Province, and Inner Mongolia Who Died After Being Persecuted”

“Hungary: First Anti-torture Exhibition in Budapest Draws Attention from the Public and the Media (Photos)”