On March 20 2005, Germany's first "World Citizens Day" was celebrated in the city of Magdeburg. Falun Gong practitioners were invited to demonstrate the five sets of exercises at the event.

The event sponsor already knows a lot about Falun Gong and has learned some of the exercises. He can't understand why the persecution is happening in China, nor can he accept the fact that the Jiang regime and the Chinese Communist Party are using all kinds of torture methods to persecute Falun Gong practitioners in order to force them renounce their beliefs. To help more people understand Falun Gong, he had invited practitioners to his house on his birthday to introduce the practice to his relatives and friends. 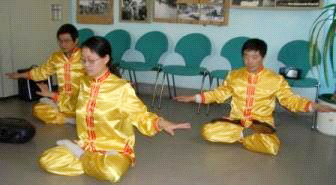 After the African drummers finished their bustling performance at the World Citizens Day event, Falun Gong practitioners performed the exercises wearing traditional Chinese yellow exercise suits. With the soothing and pleasant exercise music playing in the background, a practitioner simultaneously introduced Falun Gong to the audience. The practitioner talked about Falun Gong's rise to popularity. He also talked about the principles behind the practice before going on to outline the campaign of genocide that has been waged against Falun Gong in China for the past six years.

The noisy hall suddenly became peaceful and quiet during the Falun Gong display, it seemed that the audience was touched by the energy field of compassion. After the performance finished, a member of the audience immediately came and asked about the practice site and how to learn the exercises. Another elderly lady also expressed interest in learning the practice. Practitioners felt happy for the people, as they had learned about Falun Gong.

“Historic Photos: Group Practice at the Changchun Film Palace and Changchun City's No. 1 Automobile Factory Prior to 1999 (Photos)”