Changchun resident Mr. Jiang Quande is being illegally detained in Shilingzi Prison in Siping County, Changchun City, Jilin Province. To resist the persecution, he went on a hunger strike and is now locked up in solitary confinement. To keep Mr. Jiang in confinement and persecute him further, the prison guards fabricated lies that he "beat up people inside the prison" and refuses to see his family. His is in critical condition. 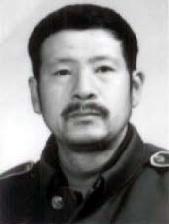 Jiang Quande, 51 years old, is from Nongan County, Changchun City. Before 2000, he was illegally detained at the Chaoyanggou Labor Camp in Changchun City and then transferred to the Fenjin Labor Camp. There, Mr. Jiang and fellow practitioners, including Liu Chengjun, Liang Zhenxing and Wei Xiushan, firmly resisted the cruel persecution and took part in many solemn and stirring events to validate Dafa. Later, he was transferred back to the Chaoyanggou Labor Camp. In order to resist the persecution, Jiang Quande shouted out, "Falun Dafa is great!" He was released unconditionally in September 2001.

After being released, Mr. Jiang was not frightened or intimidated by the evil persecution and became ever more diligent in cultivation. He slept about three hours a day, steadfastly studied the Fa, practiced the exercises, sent forth righteous thoughts, clarified the truth, and encouraged more fellow practitioners to step out to validate the Fa. He left his imprint all over Nongan County and Songyuan County. Shortly after his release, he and another practitioner visited the Chaoyanggou Labor Camp and gave truth-clarification materials to one of the prison guards. Since then, we have no longer seen articles on the website about that particular prison guard persecuting practitioners. Mr. Jiang also published articles on Minghui.net (the Chinese version of Clearwisdom.net), made suggestions for how fellow practitioners could enhance their understanding of being one body, and encouraged more practitioners who were on the wrong path or were afraid to step forward to participate in validating Dafa.

In the winter of 2002, officials from Section 1 of the Changchun Public Security Bureau arrested Mr. Jiang and several other practitioners at the materials production site in Songyuan. Mr. Jiang then lost contact with his family. The police tortured Mr. Jiang in various cruel ways during his first four days of detention in Section 1 of the Changchun Public Security Bureau. In one instance he was hung up in the air with his arms tied behind his back, which fractured both of his arms. Even today, there is a three to four inch scar on each of his arms, which are both disabled, and he cannot carry anything heavy. He can't even carry the instant noodles his family brings him.

Officials from Section 1 of the Changchun Public Security Bureau detained Jiang Quande at Songyuan Detention Center for about half a year and then transferred him to the Da'an Detention Center for another six months. Afterwards, they sentenced him to 12 years in prison. They sent him to area No. 4 in Shilingzi Prison, Siping City, where he is currently detained, for further persecution.

Before the Chinese New Year, Mr. Jiang's daughter-in-law and younger sister went to visit him at the prison and saw that he had lost three of his front teeth. He told them he only wanted to believe in "Truthfulness, Compassion, Forbearance" and to be the best person he can be. He did not commit any crime, yet the public security bureau illegally detained and persecuted him without cause. To resist the unjust persecution, he and other practitioners refused to perform any work in the prison.

On the night of March 2, 2005, Mr. Jiang's family members went to visit him, but the prison authorities refused to admit them, saying that it was not visiting day. At the family's adamant request, Section Chief Yin was called to talk to them. Yin said, "Jiang Quande beat people on January 7 and tore someone's pocket, so he is now in solitary confinement." His family said that he never beat or cursed people at home. They also said that he was a good worker, which could be verified by his workplace. They also said that, after his daughter-in-law visited him the time before, she cried in despair and did not have a happy New Year's celebration because she saw her father-in-law's arms were disabled and he could not even carry the instant noodles she had bought for him.

One of Mr. Jiang's family member asked a prison guard, "If Falun Gong practitioners do not fight back when beaten and do not curse back when cursed, how could Mr. Jiang have beaten people?" The prison guard asked him whom he was visiting. When the family member said Jiang Quande's name, the guard said, "He is on a hunger strike," and further went on to say that Shilingzi Prison was detaining more than 100 Falun Gong practitioners and that only Jiang Quande was on a hunger strike. The prison guard also said that they had injected him with nutritional supplements and further disclosed that, when another practitioner did not cooperate and accept the injection, his arms and legs were tied up, and the injection was given anyway.

In reality, being locked up in solitary confinement is an excuse for the prison to wantonly continue torturing practitioners without being seen by others. They fear the family members will see the injuries, so they do not allow visits. According to what Section Chief Yin said, Mr. Jiang had been locked up in solitary confinement since February 15, and it had been more than two weeks since his family tried to visit him on March 2, 2005. According to prison guard Li, Mr. Jiang should already have been released from solitary confinement and allowed family visits. This obvious conflict uncovers the prison's evil lie. Although the people working at the prison colluded together to persecute practitioners, one prison guard who did not participate accidentally said that it was obvious that the accusations that Jiang Quande beat people were false, but that the reference to "going on a hunger strike was true," and "suffering persecution" was true. At present, the degree of persecution Mr. Jiang is suffering is unknown. We call on all people with a sense of justice to pay attention to Jiang Quande's situation.

One of Jiang Quande's teeth was knocked out in Shilingzi Prison.

“Practitioners Benefit When Their Shortcomings Are Pointed Out with Compassion”