(Clearwisdom.net) Tamil Nadu in South India was attached by tsunami last year which caused heavy casualties and tremendous property damages. However, the fury of the waves has also exposed some ancient relics on the coast close to India's famous beachfront Mahabalipuram temple in Tamil Nadu. This has become an accident discovery for archaeologists. 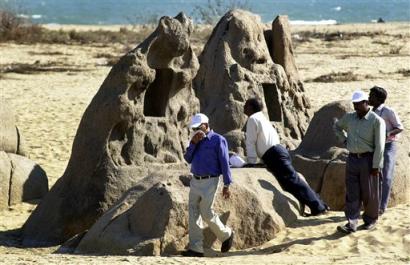 According to Beijing Youth, a Chinese newspaper, on February 11, 2005, when Indian archaeologists carried out an investigation on the Mahabalipuram temple which was hit by the tsunami, they accidentally discovered nearby some "strange" and orderly arrayed huge rocks which have engravings depicting figures of lions, horse and temples.

From the engraved figures and the order of array of these huge rocks, these rocks are considered to be part of the outside fence and inner wall of the Mahabalipuram temple. Local archaeologists believe that the findings belong to the buried ancient port of Mahabalipuram, part of the Pallava dynasty that existed in South India from the first century BC.

History is once again repeating itself! Previously, after tsunami, the earth's crust underwent changes. Some emerged from the sea and became land, while some others submerged in the sea and became part of the seabed. It would wait for countless years, when catastrophe happened again on the earth, the earth's crust would undergo changes, the land and the sea would turn upside down again. This tsunami uncovered what is believed to be an ancient pilgrimage town.

According to report from AP on February 18, archaeologists have begun underwater excavations of what is believed to be an ancient city and parts of a temple uncovered by the tsunami off the coast of a centuries-old pilgrimage town.

Three rocky structures with elaborate carvings of animals have emerged near the coastal town of Mahabalipuram, which was battered by the Dec. 26 tsunami.

As the waves receded, the force of the water removed sand deposits that had covered the structures, which appear to belong to a port city built in the seventh century, said T. Satyamurthy, a senior archaeologist with the Archaeological Survey of India. 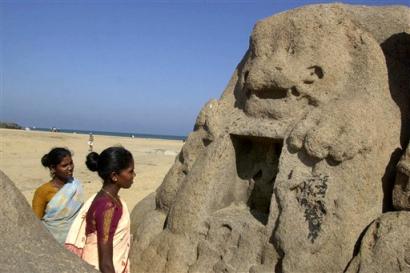 Mahabalipuram is already well known for its ancient, intricately carved shore temples that have been declared a World Heritage site and are visited each year by thousands of Hindu pilgrims and tourists. According to descriptions by early British travel writers, the area was also home to seven pagodas, six of which were submerged by the sea.

The government-run archaeological society and navy divers began underwater excavations of the area on Thursday.

"The tsunami has exposed a bas relief which appears to be part of a temple wall or a portion of the ancient port city. Our excavations will throw more light on these," Satyamurthy told The Associated Press by telephone from Madras, the capital of Tamil Nadu state.

The six-foot rocky structures that have emerged in Mahabalipuram, 30 miles south of Madras, include an elaborately carved head of an elephant and a horse in flight. Above the elephant's head is a small square-shaped niche with a carved statue of a deity. Another structure uncovered by the tsunami has a reclining lion sculpted on it.

According to archaeologists, lions, elephants and peacocks were commonly used to decorate walls and temples during the Pallava period in the seventh and eighth centuries.

"These structures could be part of the legendary seven pagodas. With the waters receding and the coastline changing, we expect some more edifices to be exposed," Satyamurthy said.