From December 16 to 19, the "Truthfulness-Compassion-Forbearance" art exhibition was held at Walker Memorial at MIT. Three artists, Falun Gong practitioners Chen Xiaoping, Wang Weixing and Fan Hong came to participate in the exhibition from Canada and New York. They talked with the audience and then led them on a walk-through of their art works. 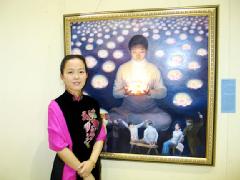 Ms. Chen has several works displayed in this exhibition. The "Lotus Hearts" was inspired by the candlelight vigil in 2003 held in Washington DC in which she participated, together with several thousand practitioners from all over the world. When she was holding a lotus lantern at the Lincoln Memorial, she was moved to tears by the sight, and by the suffering of practitioners in China. However, the artwork presents more a sense of light and hope than sadness: The message is that the persecution will be ended immediately if everyone lights up a lotus lantern in their hearts after they learn the truth of Falun Dafa and the ongoing persecution.

"The Unity of Nature and Human" comes from a precious memory of hers. She was living on a small island when she just started to practice Falun Gong, and she often went to a beach to practice. She experienced such a feeling of the unity between nature and herself, so wonderful and concrete. Therefore, she used her paintbrush to record that precious moment.

"I liked to paint fairies when I was young, and copied many deities from Dunhuang mural paintings. I learned Chinese traditional painting and calligraphy from famous masters in China and studied charcoal drawing in a university. I then came to Saipan, a beautiful tropical island far from Hawaii. I studied art in the only university in Saipan and I have my own art gallery. With my hard work, my paintings were gradually recognized by the local government and other artists. In 1998, as the first-ever Chinese person, I received an Outstanding Artist award from the Governor-general. From 1999 to 2002, I held three solo art exhibitions and my artworks have been collected by Hawaii Bank, city governments, the Tourism Bureau and art fans from all circles. VERIZON's Pacific Branch chose my works as cover pictures for their postcards, calendars and phone books. Five schools have invited me as a visiting professor. I started to practice Falun Gong in May 1999. It was a special moment. I was having dinner at a friend's home. My friend was playing a Falun Gong videotape, and I was attracted by Master's peaceful expression and graceful movements. I exclaimed, "Aren't these a Buddha's gestures? It is so beautiful. This is exactly what I want to learn." After I finished reading Zhuan Falun, I felt wonderful. People should live by the principles elaborated by the book. How wonderful it would be if all the people come to practice Falun Dafa! Since I started to practice, my body has been constantly cleansed. My chronic gastritis and severe dysmenorrhea have both disappeared. Moreover, my temper has become better and better. Before, I was quite an arrogant person, but I have now learned to look inside myself and find my own shortcomings. I was seeking fame, but I now know that the purpose of life is much more than that, and there are more wonderful things to seek. I gradually sensed a profound power that enables me to live rationally and peacefully."

"Though I should have been completely concentrating on my art, the ongoing persecution of Falun Dafa greatly disturbed me and I have been often moved to tears by those tragic stories that have happened to practitioners in China. I can't concentrate on painting without caring for my fellow practitioners. In October 2001, I joined the "SOS! Walk Across Canada to Rescue Falun Gong Practitioners Persecuted in China" effort. From Vancouver to Calgary, we carried our banners and walked through rain and snow for a month. Along the walk route, we visited all the local governments and media to tell them our heartfelt appeal: Please help us end the persecution! During this period, my understanding of art and life was further deepened. In the past, my paintings were driven by the art market, but now I emphasize more the internal beauty which can inspire people's desire for true beauty. While happiness comes from giving up things, not from gaining, art comes from living an honest life, and then transcends life. When I let go of my attachments, my heart become very calm and peaceful and my artwork thus becomes further purified. Cultivation has lifted me up to a completely new realm and given me a new momentum for creation."

Ms. Fan has two works painted on silk, which combine traditional Chinese painting technique with the light and color of Western painting. The paintings were gone over dozens of times and each took several months to complete to make sure they are mistake-free. The works depict the persecution that Ms. Fan had suffered in China. However, no hatred and distress can be found from the paintings, while compassion and the law of retribution is clearly depicted.

Fan Hong used to have a happy family. She was married and has a daughter, she was a costume designer and had an M.S. degree in art from Guangzhou Art School. Ms. Fan started to practice Falun Gong in 1997 and benefited from the practice a lot. Before the persecution, she used to practice the exercises every morning in Huanghuagang Park and then go to work. After the persecution started in 1999, however, her normal life was completely destroyed. Her husband was forced to divorce her and she couldn't continue her artistic life. Ms. Fan couldn't understand why all these things happened to her and why such a good practice was being persecuted.

Fan Hong went to Tiananmen Square to display a "Falun Dafa is Great" banner, as a way to appeal to the government. She was then arrested and severely tortured in prison. She was stripped naked and pushed to the ground with criminals stomping on her body. She was tied to a bed to be force-fed. The perpetrators were also greatly moved by her unyielding spirit and asked: " How can you, such a gentle lady, be so firm in Falun Gong and dare to recite the Fa when we force-feed you?" She told them, "Maybe this is the only opportunity for me to meet you; I want to tell you that Falun Dafa is great and that you shouldn't do such bad things." Touched by her great compassion, some police officers and criminal inmates said that they would treat all practitioners reasonably in the future, and they indeed did so.

While Ms. Fan was detained, whether in Beijing or Dongshan Detention Center in Guangzhou, she always practiced Falun Gong. When she meditated, she completely ignored the darkness of prison and those distorted evil faces. She saw great and beautiful dimensions, which she later depicted in her artworks. Fan Hong said the beauty and greatness that she witnessed in other dimensions empowered her to face the evil with a peaceful heart. Even in the most critical moments, she never thought of death nor developed fear, and she strongly believed that she would break through the hardships and regain her freedom.

In 2001, Ms. Fan managed to come to the U.S. Since then, on the Internet, she often saw news of the death of her friends, reminding her of the suffering that she had gone through. She then decided to use her paintbrush to describe her experiences, in order to help more people understand the truth of the persecution.

At the same time, the process of creating her artwork also strengthened her confidence. She said that she had witnessed the unyielding spirit of many fellow practitioners during the chaos of the persecution, and such scenes often came to mind, inspiring her to paint. 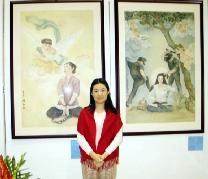 Artist Hong Fan and her art

Ms. Wang Weixing said that as an artist, she can also sense the suffering of practitioners even though she wasn't persecuted in China. The work, "I want Daddy," was created based on the real story of Jane Dai's family. In the painting, she purposefully depicted in the eyes of the daughter the confusion, the sadness and the innocent hope that Daddy could one day come back. The broken wall, broken family... the innocent child has to sense the bitterness of life in such an early age.

"I seek for perfection in both real life and art. However, every pursuit of mine only resulted in broken pieces instead of perfection. After I started to practice Falun Gong, my understanding changed as my spirit and body both changed fundamentally. My view of the world also changed accordingly. I admired the Impressionist School in the past. Last year, I had a chance to go to Paris where I copied paintings in the Louvre for half a year. I reexamined every painting in the museum and truly sensed the sublimity of deities. Such perfection is unmatchable by any human figure. Cultivating Falun Dafa purified my body and spirit and led me to make breakthroughs in art," Ms. Wang said. 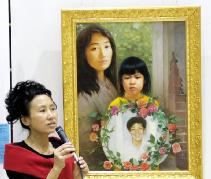 Artist Weixing Wang and her work, "I want Daddy"

Most artworks displayed in this art exhibition are paintings. The common feature of all the artworks is that they are all works of Falun Dafa practitioners. Every painting employed traditional techniques and was created through the artists' personal experience and their hearts.

Art can't be separated from life and morality. Only through the uplifting of morality can humans eliminate the impure elements in art and create a better artistic realm.

“Sued in a US Court, Zhao Zhizhen Claims Chinese Communist Party's State-Controlled Defamation Should be Protected as "Free Speech"”