Heshi (pressing both hands together in front of chest) to greet compassionate and great Master, Happy New Year! Here we present adigital greeting card made by a practitioner! 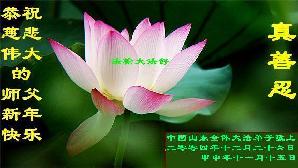 Mr. Feng Min was a Falun Dafa practitioner in the Nankai District of Tianjin. He died from police harassment and threats for practicing Falun Gong. The exact date of his death is not available.

Ms. Huang Bing from Dalian City Dies as a result of Persecution

Ms. Huang Bing, 26, was a Falun Gong practitioner from Xudatun Village, Xingtai Town, Pulandian, Dalian City, Liaoning Province. She used to suffer from leukemia, but after she took up the practice of Falun Gong, she completely recovered. Around July 20, 2001, she went to Beijing to appeal for Falun Gong, but she was arrested by Pulandian police, who later sent her to the Pulandian Detention Center. During the eight months of detention there, she was brutally tortured. As a result, she was in a very bad state of health. The police paid no attention to her weak condition and insisted on transferring her to Masanjia Labor Camp to be further persecuted. However, Ms. Huang failed the medical examination required by the labor camp. Fearing that she might die during detention, the police sent her back home.