The Story Behind the Death of Ms. Zhou Xiangmei of Linyi City, Shandong Province (Photos) 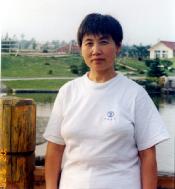 Ms. Zhou Xiangmei was a Falun Gong practitioner in Linyi City, Shandong Province. She was tortured to death by the local "610 Office" on June 20, 2003, at the age of forty-seven.

The "610 Office" had long planned to abduct her for brainwashing and to attempt to extract the names and details of the activities of other Falun Gong practitioners from her. Ms. Zhou's employer, the Credit Union in Nanfang Town, stopped paying her salary with no explanation, and she was forced to become homeless. Ms. Zhou's husband, Li Yongxin, also a Falun Gong practitioner, was illegally sentenced to ten years in jail, so their son had to live at his aunt's home, where Ms Zhou would sometimes visit him.

It seemed she had been followed. At 5pm Ms. Zhou's former supervisor Yi Yongguo phoned to see if she was there. As soon as she hung up the phone, three or four vehicles carrying a dozen people from the "610 Office" and her former workplace, led by associate director Wang, blocked the gate to the yard.

With her long-term experience of persecution, Ms. Zhou had a clear knowledge of their intentions. If she was abducted, she understood that she could be tortured or even murdered.

With her husband imprisoned, she had to care for her son and her parents and many people still needed to receive truth-clarifying information. Ms. Zhou refused to cooperate with the evil arrangement, and did not open the door for them. She and her family played cards until midnight, waiting until the authorities finally fell asleep in the cars, although the entrance was still tightly blocked with vehicles.

To keep her sister-in-law out of trouble, Ms. Zhou tried different ways to escape. In the end, she tore a bed sheet to make a rope. At about 2 or 3am her son tied the rope around her, and lowered her down from the sixth floor. When she reached the fourth floor, the rope broke, and Ms. Zhou Xiangmei dropped to her death on the first floor balcony. Hence, a righteous and kindhearted person was forced to risk and lose her life, leaving her son, her illegally jailed husband, her parents and so many friends.

After this tragedy, the "610 Office" tried to shift the blame to Ms. Zhou's son Li Ning. The investigators threatened him and fabricated an accident report, claiming that Li Ning let go of the rope to kill his mother.

Everyone who knows the facts has a clear mind: It is the "610 Office" and accomplices from the Credit Union in Nanfang Town that caused the death of Ms. Zhou Xiangmei. They forced her to become homeless and destitute, caused her son to lose his parents and home and drove her to desperation. Because of them, she risked her life to escape further persecution, and asked her son to lower her down from the sixth floor.

Li Ning was only trying to help his mother who had no alternatives. Wasn't it natural for him to have given a hand when his mother's life was threatened with persecution? All his mother wanted was to be a good person through practicing Falun Gong. Jiang, out of jealousy, defames good people with lies that deceive the public and break up families. Imagine the heart-piercing bitterness and sorrow Li Ning must have suffered seeing his mother drop to her death. Yet the corrupt authorities are charging him with killing her.

When Li Ning came downstairs to check on his mother, he wrung his hands in worry and sorrow, but the 610 police on site claimed that he was doing Heshi, a posture in Falun Gong exercises, and punched him hard in the face, causing his nose and mouth to bleed.

Although they framed Li Ning, on one level they clearly understand the gravity of the crimes they've committed. To keep the news from the public and the international community, the "610 Office" had guards watch the crematory until Ms. Zhou Xiangmei's body was cremated. No one was allowed to take pictures of the body or even mourn her death.

Ms. Zhou's employer, the Credit Union in Nanfang Town, was also nervous about what happened, and claimed they had gone there to pay her salary. Why would they need several cars, over a dozen people, and the company of the "610 Office" to send one person's salary? For compensation of Ms. Zhou's death, the Credit Union initially planned to pay 100,000 Yuan, but under pressure from the "610 Office" it paid only 10,000 Yuan, likely from Ms. Zhou's own savings account and the one year's salary that the workplace was holding. What a pity! These people betrayed their conscience even further after pushing their colleague to death.

Ms. Zhou is dead, but the evil force has not withdrawn. When Ms. Zhou's younger brother tried to file a lawsuit, Li Guixiang, the city vice secretary of the Party in charge of political and legal issues, threatened to fire him if he filed the case. The information indicated that the authorities were trying to arrest Li Ning and his aunt. In Jiang's persecution against Falun Gong, many innocent Chinese are implicated. We call on the righteous people and human rights organizations in the international community to follow the situation of Ms. Zhou Xiangmei's relatives, and help free them from further persecution, threat or misfortune.

In Ms. Zhou Xiangmei's case, we are sorry for those people from the village Credit Union in Nanfang Town, Lanshan District, Linyi City, who became accomplices of the "610 Office" in the persecution of a praised, kind, diligent and respectable colleague: Why do you go against your own conscience? Jiang has used you for killing today, and will use you as a scapegoat tomorrow. To avoid responsibility, the local "610 Office" claimed they had left before the accident and only the Credit Union people were left guarding the place. Here we would like to offer a piece of advice for those who, out of ignorance, help Jiang's regime in the persecution of Falun Gong: "Please clear your mind and consider your future."

Li Guixiang, the vice secretary (in charge of political and legal issue) of the CPC in Linyi City;

Xing Yongnong, the section chief of the 610 Office, the Linyi City Police Department;

Liu Fengcai, the director of the 610 Office, Linyi City;