(Clearwisdom.net June 15, 2003) To support the lawsuit against Jiang and better clarify the truth of Falun Gong to people in Ohio, local practitioners held a press conference in Fountain Square at Cincinnati's center. The press conference aimed at disclosing the Jiang regime's brutal persecution of Falun Gong practitioners in the past four years, and calling upon more people to support the genocide lawsuit against Jiang, the former dictator of China. At the press conference, Falun Gong practitioners also talked about the abuse U.S. citizen Charles Li has suffered in China's jail as well the forced feeding he was subjected to. Practitioners called upon the U.S. government and people to help Charles Li regain his freedom.

At the press conference a Ph.D. candidate from the University of Cincinnati told the story of his brother Mr. Wang Weiyu, an outstanding Ph.D. candidate from Qinghua University who was forced to quit school because he practiced Falun Gong. Chinese police arrested Mr. Wang last August. His whereabouts are still unknown. He called upon people to work together to put an end to the persecution of Falun Gong, and expressed hopes that his brother could be reunited with his family soon. This student is not a Falun Gong practitioner but stepped forward for the sake of his brother.

Congressman Steve Chabot, who had been very supportive to Falun Gong, sent a letter to the press conference to express his support. He said in his letter, "I wanted to send along an expression of my support for your efforts to stop the persecution of Falun Gong practitioners by the communist dictatorship of the People's Republic of China. I especially commend you for your hard work on behalf of freedom and your efforts to gain the release of Dr. Charles Li, an American citizen currently being detained in China." 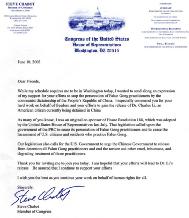 “Precious Photo: Falun Appears When the Heart Is Pure”