(Clearwisdom.net May 17, 2003) At 1 pm on May 16, Falun Gong practitioners in the San Francisco area held a press conference outside the Chinese Consulate to rescue Charles Li and expose the crime of genocide committed by Jiang and his regime. 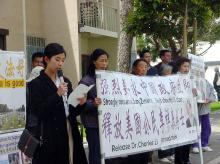 During the press conference, Charles Li's fiancée, Ms. Yeung-ching Foo said, "The Jiang regime's cruel persecution of Falun Gong practitioners has lasted four years. It uses all the state-controlled media to slander Falun Gong with fabricated lies, which has deceived over 1 billion Chinese people. The regime never follows the law to treat Falun Gong practitioners." "In this situation, Charles Li was put on trial at the end of March and was wrongfully sentenced to three years in prison. Later, Charles put forward an appeal, but was unreasonably rejected by the Jiangsu Supreme Court. Charles Li is now being held in a jail in Nanjing City. I call upon all kind-hearted people around the world to join us to stop this persecution of Falun Gong practitioners and bring Charles home safely."