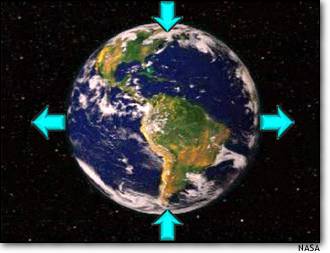 Since 1997, Earth's gravitational field has been flattening out at the poles and bulging out at the equator, as indicated by the arrows in this picture. (NASA, By Robert Roy Britt, SPACE.COM)

(Clearwisdom.net) MSNBC, Aug. 1 -- Something strange has been going on under our feet for the past four years. Earth's gravity field suddenly shifted gears and began getting flatter, reversing a course of centuries during which the planet and its gravity field grew rounder each year.

THE SCIENTISTS who noticed the change and report it in Friday's issue of the journal Science suspect Earth itself may be flattening out, with the oceans rising near the equator, but they aren't sure.

What they do know is that Earth has never been round. It has always bulged at the equator and is about 0.3 percent fatter there, partly a result of the planet's rotation.

“Break Through Old Forces' Arrangements, Clarify the Truth to the Governments and Save Sentient Beings ”