On March 25, Transnational Radical Party, an NGO, sponsored a 2-hour panel discussion regarding "Violence against Women in China" at the 58th Session of the Commission on Human Rights in Geneva, Switzerland. Marina Sikora of the Transnational Radical Party chaired the event, which featured four female Falun Gong practitioners who have all experienced the persecution first-hand. About 50 NGO's and government delegates attended the forum. 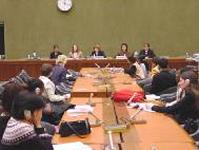 Four female Falun Gong practitioners were invited to share their experience in the persecution.

The first speaker was Ms. Zhizhen Dai from Australia. Ms. Dai began by explaining the general situation of Falun Gong in China, and how women are subjected to extreme torture methods. Also, she expressed concern for the two women in Changchun who have been sentenced to death for allegedly being involved in the Changchun TV incident last month. Ms. Dai then told her horrifying story of how the Chinese policed tortured her husband to death in a labor camp. She escaped this same fate because she was an Australian citizen. Back in Australia, she spent 8 months appealing to the Chinese government to recover her husband's ashes, but her requests were never even acknowledged. Finally, several months later, the Australian government was able to use diplomatic means to retrieve her husband's remains. Ms. Dai and her 2-year-old baby girl are now doing their best to cope with the terrible situation.

The next speaker was Mrs. Mela Wu Malin, a registered nurse from New York City. Mrs. Wu told her story of how she was beaten by Chinese police during her visit to China in early 2000. She had gone to China to visit her 95-year-old grandfather and hoped to see him before he passed away. She also told the stories of several women, whom she had met during her trip and had been beaten and tortured simply because they practiced Falun Gong.

The third speaker was Dr. Lili Feng, an associate professor of medicine at Baylor College of Medicine in Houston, Texas. Dr. Feng shared her story of being detained and placed in a forced labor camp in China. She was visiting relatives in China when the policed detained her. She was forced to make hairbrushes for 12 hours per day while in the forced labor camp. She shared many stories of other Falun Gong women who were beaten and tortured while in the labor camp.

The final speaker was Ms. Lilian Staf, a computer programmer from London. Ms. Staf shared her experience of being brutalized by the Chinese police when she went to Beijing to participate in the "35 Westerner Appeal" on Tiananmen Square. She then shared her views on violence against women in China from a westerner's point of view.

After the four speakers, there was one hour of questions from the audience and discussion. The first question asked by an NGO representative was, "What is Falun Gong and why would the Chinese government want to persecute it so harshly?" Dr. Shiyu Zhou, professor from the University of Pennsylvania, thoroughly answered both questions. Many other NGO representatives expressed the need to join together to condemn China through a UN resolution.

“Reflections on Damage to our Local Material-Producing Sites (Part II)”