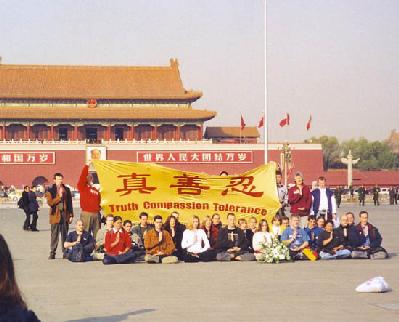 During November 2001, 36 western Falun Gong practitioners traveled to Beijing to appeal to the Jiang regime to end its persecution of Falun Gong. They also wanted to appeal to the Chinese people for justice. They were arrested, beaten and detained.

Location and date of incident:

Mr. Larsson was first grabbed in Tiananmen Square while sitting in the lotus position [a traditional meditation position]. Police grabbed him and pulled him off the ground. While telling the police that there was no need for violence, the police responded, "This is China," "Do as I say."

After being transferred to the police station, Mr. Larsson was separated from the rest of the group. He was interrogated, not permitted to contact his embassy and also forcefully searched.

Mr. Larsson was later interrogated again. At this time, five police officers beat him while trying to forcefully take his photo by twisting his arm behind his back and also using a chokehold.

The following morning, he was transferred along with the others to a remote part of Beijing Airport and deported.

Before taking him to the airport, the police went to his hotel to collect his luggage, which they searched. Upon his arrival back in Sweden, there were some important papers and documents missing.

Miss Kleberg was one of the practitioners who held the banner during the appeal on Tiananmen Square. She and the others by the banner were the first ones attacked by police and taken to the police buses.

In the police bus, Miss Kleberg managed to leave through a side window. However, while walking away she was discovered by a young guard who tackled her. She was sent flying for several meters, but landed on her feet. A female police officer pushed her towards three other police officers who tried to lock both of her arms behind her back. She was again forced back into a police bus.

While in the police station, she was pushed down the stairs by the police towards a cell in the basement. Her camera was confiscated.

Miss Kleberg was also not permitted to contact her embassy and was told that she was not to return to China for five years.

While being pushed into the police bus on Tiananmen Square, Miss Svensson had her arm pulled up behind her back. The police also forced her head at an awkward angle inside the police bus to restrain her. Miss. Svensson commented; "I did not want to break my neck, so I just tried to sit very still."

She was also one of the practitioners whom police pushed down the stairs.

After his participation in the appeal on Tiananmen Square, Mr. Odar was dragged to the police bus. He was forced inside and when he tried to leave the bus again a policeman began to hit him in the face. He fell back onto the floor because of the beating.

After being detained and then transferred with the others to a hotel near the airport, Miss Sahlin had a paper airplane thrown at her eye by a police officer as she attempted to sleep. The following day she was deported.

Miss Koivuluoto was dragged to the police bus after her participation in the appeal on Tiananmen Square. She noted that police tried to drag her by the legs into the bus while she was lying on the ground. Another officer caught her by the hair and lifted her up, forcing her onto the bus.

In the police bus, the same police officer that had lifted Miss Koivuluoto up by the hair struck her on her face. She fell on a practitioner who had been knocked to the floor, injuring her right thigh, left arm and left hip. She also had a doctor examine her injuries.

While being dragged to the police bus, Miss Hakosalo was struck in the face. A policeman dragged her by the hair and arms to the police van. In the van, a policeman twisted her arm and head to the ground, which he did not let go of until they arrived at the station.

While being moved to the police van, Mr. Nordstrand had his arms twisted by police officers. He was also beaten and kicked. This continued inside the police van.

He was also forced to pay for another flight ticket.

While sitting in meditation on Tiananmen Square, Ms. Staaf was lifted by her hair and pulled by the arms. According to her personal statement, the pain was so intense that it made her "whole body numb." She was also struck in the face.

The marks from police mistreatment were also visible for several days after the appeal, including bruising on the left leg and left arm. Ms. Staaf also found that police had pulled out a lot of hair.

During the detention, Ms. Staaf meditated, and the police also tried to force her backwards and threatened her.