He was not tired from the long flight but appeared full of vigor. The major Minnesota media such as the Star Tribune, Minnesota Daily, ABC TV station,UPN TV station, and a Chinese TV station rushed to the airport to interview him.

In the press conference on the airport, he described the last two days' journey in China, including the process of appealing in Tiananmen Square and being arrested by Chinese police. 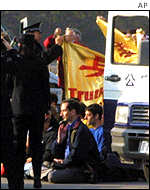 At 2:00 p.m. on November 20, 2001, he and 34 other Western practitioners sat cross-legged in Tiananmen Square and sent forth righteous thoughts. Within a minute, he heard police whistles. During the whole process, he kept sitting cross-legged peacefully with his eyes closed slightly and maintaining a righteous mind. Thus he did not see onlookers' reactions and how the police treated other practitioners. Three policemen worked together and dragged him to a police van.

The police took them to a police station near the Square. In the police van, Nania told the police in Chinese, "Good is rewarded with good and evil meets evil." The police seemed to nod to him helplessly.

About five hours later, police took them to a conference room in a hotel near the airport and continued interrogating them. The police brought some boxed meals and wanted to take video footage to show their "humanitarian treatment." The practitioners refused to eat the "relief food" to prevent the police from creating false propaganda.

During the detention, police did not allow them to contact the outside world or inform their respective embassies.

In the press conference, he appealed to Minnesota and to the people of the world to pay attention to the persecution against Falun Gong in China because it is not just a China issue but concerns all people worldwide so that they may believe in "Truthfulness, Benevolence, Forbearance".