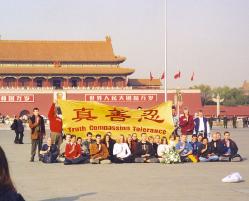 On November 20, 2001, three dozen Western Falun Gong practitioners from over ten countries arrived in Tiananmen Square in Beijing. They unfurled a huge banner reading, "Truthfulness-Compassion-Tolerance" to show the Chinese government, all people in China and around the world the truth of Falun Gong. (Above is a group photo of the Western practitioners sending forth righteous thoughts in Tiananmen Square) 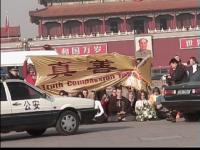 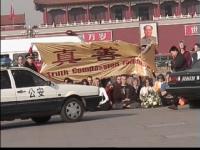 Facing these peaceful and serene Western Falun Gong practitioners, Chinese police did not dare to kick and punch them in public, as they would normally treat Chinese citizens. They also knew that they should not treat Westerners as the target for applying their most base means. However, the police are too well studied when it comes to employing violence and humiliation against others. The pictures above were recorded at the moment when the banner with the words, "Truthfulness-Compassion-Tolerance" was torn by the police.