(Minghui.org) Since Mr. Wang Haitian was released from the Shahezi Brainwashing Center on December 5, 2013, his health deteriorated rapidly. He suffered breathing difficulty, a severely swollen abdomen, and constipation. He died within two months of his release, on February 2, 2014, at the age of 45.

Three days after his death, his mouth turned black and purple and his face green. Small black particles about the size of grains of rice were found in his ashes. Family members suspect that he had been injected with harmful drugs. 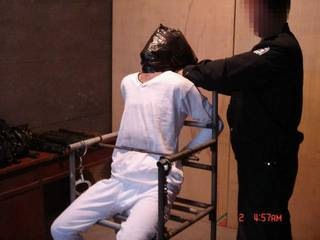 Mr. Wang, a Mongolian, also went by the name Bao Wenju. He operated a delicatessen on Beiji Gourmet Street in the Chuanying District of Jilin City, Jilin Province.

Mr. Wang was arrested on October 18, 2013, outside of his home in Building No. 8, Minzu Alley, Beiji Street, Jilin City. Officers at the Jilin Police Department and Zhihe Police Station took him to the Shahezi Brainwashing Center.

Mr. Wang was tortured in the center, including being force-fed with chili pepper water and mustard oil through his nose and having cigarettes inserted into his nostrils. The police had once threatened to remove his corneas.