A Chinese Visitor to a Falun Gong Information Activity in the UK: "I Support You and Stand on Your Side!" (Photos)

(Clearwisdom.net) On July 11, 2009, a group of Falun Gong practitioners went to the St. Martin's Square in the center of London, UK, to hold a truth-clarifying activity for the second time this month. They have been holding such activities whenever possible to reach more people with the truth about the persecution of Falun Gong. The practitioners set up a banner reading "Falun Dafa Is Good" in both Chinese and English. The display boards showing how Falun Dafa has spread all over the world showed the beauty of Dafa, while the display boards of the persecution of Falun Gong disclosed the cruelty and villainy of the Chinese Communist Party (CCP). Many passersby stopped to take a closer look. 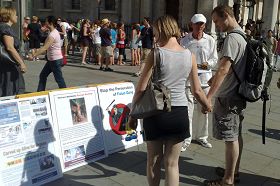 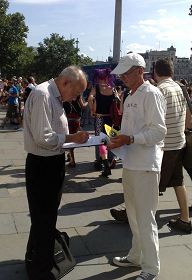 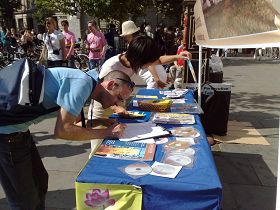 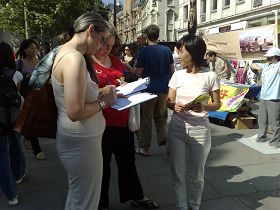 Several practitioners demonstrated the Falun Gong exercises, while others distributed "truth-clarifying" leaflets and asked for signatures to condemn the persecution.

On this particular day, many Chinese also stopped in front of the display boards. They talked with practitioners and accepted informational materials. Ms. Luo said that she believed that the information about the persecution of Falun Gong was true. She talked about what her family had suffered in every persecution movement since the CCP has been in power. She said to a practitioner, "I support you. I stand on your side. What you are doing is excellent. You are great!" The practitioner told her about quitting the CCP and persuaded her to quit the Party and all its affiliated organizations. She then told the practitioner her real name and said loudly, "I quit! I quit! I quit it completely!" Before she left, the practitioner told her to inform her husband about "Quitting the CCP" and gave her the Epoch Times website where he could announce his withdrawal. She nodded and said that she often visited that website.

A mother and daughter with a Sichuan accent and the daughter's Western boyfriend stopped in front of the display boards. A practitioner offered them a CD and a leaflet . The mother read the posters and said with emotion that she had practiced Falun Gong before the persecution. The practitioner then told them more about the persecution and persuaded them to quit the CCP organizations. They agreed and quit the CCP.

This series of truth-clarifying activities in London have allowed more and more people, especially Chinese, to learn the truth about Falun Gong and the deceitful, villainous, and violent nature of the CCP. Many of them have chosen to stand on the side of justice.

“Russia: District Secretary for Culture in Moscow: "Truth, Compassion and Forbearance Can Be Seen in Each Painting" (Photos)”

“Photographer at the Second Shen Yun Show in Santiago, Chile: "It Was Wonderful, Very Diverse" (Photos)”