May 13, 2009, was the 10th World Falun Dafa Day and the 17th anniversary of Falun Dafa's public introduction. To celebrate the occasion, Falun Gong practitioners in Chicago held an event on Federal Plaza. Alvin Starks, Assistant to Cook County Supervisor Todd Stroger, attended and proclaimed May 11 to 19 as Falun Dafa Days for the county. Illinois State Senator Jacqueline Collins sent a letter to express her respect for Falun Dafa practitioners. 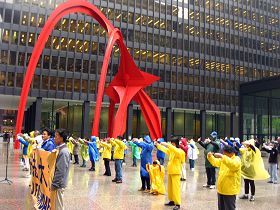 On May 13, 2009, practitioners in Chicago practice the exercises on Federal Plaza to celebrate World Falun Dafa Day 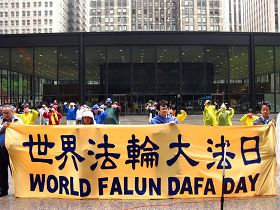 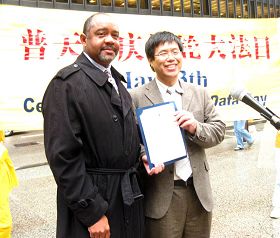 Mr. Alvin Starks, Assistant to Supervisor Todd Stroger of Cook County, in a group photo with the Director of the Mid-USA Falun Dafa Association

Federal Plaza is known as the location of the "Flamingo" sculpture. It has been updated since 2003 and is where Falun Gong practitioners hold group practice every Wednesday at noon.

On May 13, 2009, practitioners came to the plaza again to celebrate World Falun Dafa Day and the 17th anniversary of Falun Dafa's public introduction.

Mr. Sen Yang, Director of the Mid-USA Falun Dafa Association, said, "The persecution will never succeed. Jiang Zemin said at the beginning of the persecution that the CCP would eliminate Falun Gong within three months. Ten years have passed. Everyone can see that Falun Gong has become stronger and has spread from more than forty countries ten years ago to more than 110 countries now. We want the persecution to stop as soon as possible so that practitioners in China can have a peaceful cultivation environment."

Many passersby stopped to watch the performance and view the posters. A lady from Chile observed for a long time. She hoped that Falun Gong practitioners would offer classes in Chile. When she was told that more than one hundred countries, including Chile, have practice sites, she was surprised. She said excitedly that she would find contact information and request classes in her hometown.

Supervisor of Cook County Thanks Practitioners Who Brought the Practice to Cook County.

Cook County includes Chicago and has a population of nearly five million people. It is comparable to Los Angeles County in population density. Mr. Alvin Starks, Assistant to Supervisor Todd Stroger of Cook County, came to the Federal Plaza in the rain and brought the supervisor's proclamation. He read the proclamation, in which the supervisor proclaimed May 11 to 19 as Falun Dafa Days in Cook County and thanked those who brought the practice to the county.

She emphasized that Falun Dafa practitioners should keep to their principles and show great compassion and tolerance in this worst of situations, which moves people's hearts. She stated that the 96th Senate of Illinois decided to express its respect for Falun Gong practitioners during this Falun Dafa week.