(Clearwisdom.net) In May of 1992, the founder of Falun Dafa (Falun Gong) Mr. Li Hongzhi, promulgated Falun Xiulian Dafa to the world, which has "Truth, Compassion , Tolerance" to guide one's cultivation practice. The practice has spread to 114 countries, enabling one hundred million people all over the world benefit in mind and body. Every year the 13th May has been set as "World Falun Dafa Day", and Falun Gong practitioners from around the world celebrate this solemn and magnificent day, to give their greetings to respected Master. On the 10th of May 2009, Falun Gong practitioners from Sweden and Denmark held celebratory activities in the public square in front of Copenhagen city hall. 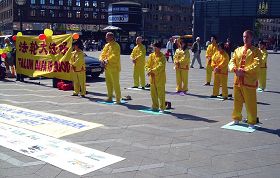 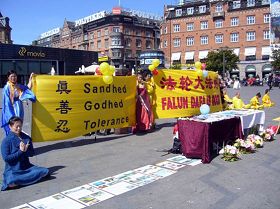 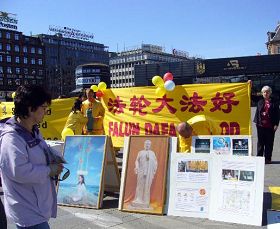 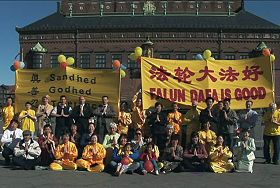 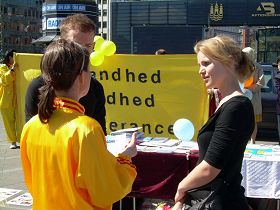 Johan and Maria, two students from Copenhagen University said: "Cultivating Truth Compassion Tolerance is truly good, we also want to study it." "The human rights persecution towards Falun Gong practitioners that is happening in China is hard for people to accept."

A young Danish man called Yansen was standing by the display boards earnestly reading an introduction to the grand occasion of how Falun Dafa has spread throughout the world, and upon understanding the truth he immediately signed his name at the petition table calling on a stop to the persecution of Falun Gong. He said : "We all know that Communism is evil, especially the CCP, in the end one day they will be wiped out by history, at that time the whole world will be peaceful and happy."

A Mexican man who works at the Copenhagen library did not understand Falun Gong because he had heard the CCP lies. Ms. Li, a Falun Gong practitioner, exposed the CCP's deceptive propaganda with her own first hand experiences, and told him the true situation about how Falun Gong practitioners had been innocent victims of persecution, enabling this gentleman to understand Falun Dafa and the grand occasion of its spreading throughout the world in a positive light.

A student called Kristin was moved by the exercise demonstration, and she lifted her camera up to take a picture of this beautiful scene, then signed her name to the petition to stop the persecution. She expressed: "As for the persecution of Falun Gong it is wrong, Falun Gong should not be prohibited in China, I think everybody knows that Falun Gong is peaceful, that people believe in Falun Gong is a good thing." 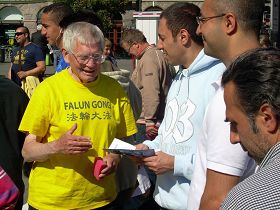 Mr. Bauer, an 82 year old retired engineer from Denmark, has practiced Falun Gong for eleven years and has benefited in both mind and body. He warmly introduces Falun Gong to the people. 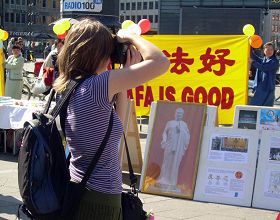 Falun Gong practitioner Li, a newer practitioner, has benefited in mind and body. She said: "I feel like my whole body is energetic, and I am not tired when walking, previously I would feel tired everyday after work, and would want to sleep, but now I don't have this feeling of tiredness, and I am very happy everyday." "After practicing Falun Gong, everybody takes care of other people from the depths of their hearts, they help other people, they help people very enthusiastically."

After practitioner Steven practiced cultivation in Falun Gong, his life became much more wonderful, and full of meaning. He said: "Today we are celebrating world Falun Dafa day, and at the same time we are wishing our Master Li Hongzhi a happy birthday! Here we are telling the world's people that Falun Gong disciples adhere to "Truth, Compassion, Tolerance". When in fact, as a person, one should abide by this principle. However in mainland China many practitioners of Falun Gong are persecuted consequently. This is the reason why we come here."

On the 12th of July 1999, the clique of the Jiang family started the brutal suppression of Falun Gong practitioners. Even so, true principles will not lose their color because of terror and violence. Falun Gong spread to even more countries around the world, and the Denmark Falun Dafa association was established on the 15th of October 2001. 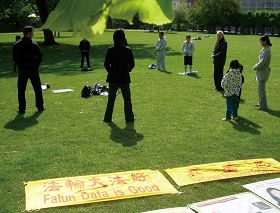 Copenhagen Falun Gong practitioners practice the exercises in the park.

“New York: Spreading the Fa at the Asian Festival (Photos)”