Mr. Liu Hsuan-yong, chairman of National Taiwan Symphony Orchestra, commended the DPA show as a top-notch artistic performance. He thought the performers' training in the fundamentals was remarkable and that the theme of each program was designed around a good story. He had looked forward to hearing the live orchestra, saying, "I heard in the orchestra's accompaniment many traditional Chinese musical instruments, which enhanced and enriched the performances. A live orchestra is much better and more impressive."


Huang Ming-ying is an oil painter who specializes in realism. He is the honorary chairman of the first and second Chinese Contemporary Artists Association. He was amazed at the DPA's reproduction of the lost 5,000-year-old of Chinese culture. He said, "Integrating the spirit of truthfulness, compassion, and beauty into the performance and presenting them through dance--I feel it perfect to be able to reach such a realm. It is very difficult to achieve it artistically. I'm deeply impressed."

"The DPA performance has reached the highest pinnacle." Mr. Huang, who has had experience in painting for 40 years, liked the DPA's artistic expression, saying, "What touched people's hearts is the program related to the persecution of Falun Gong. When the cultivator was persecuted, gods came from the other side, and the two were integrated. I feel such a presentation of stage scenes to be quite innovative. I feel the show express another layer of meaning."

The DPA show gave Mr. Huang hope that kind people will definitely conquer evil. "Because, humanity will change, politics will also change, but kindness is everlasting, the five thousand years of culture is eternal. You can persecute him at one time, but it will be different dozens years later. Kindness will ultimately triumph over evil."

Company General Manager: The lyrics are simple but they penetrate people's hearts

Chen Hsiu-Ching, general manager of the Thai Yang Industrial Company, was deeply impressed by vocalists. She particularly admired the fact that the lyrics, while succinct, had the power to penetrate people's hearts. "The tenor and soprano have magnificent voices that are resounding and full of vitality. The content of the lyrics reflects deep religious faith, and just a few simple and brief verses filled people with deep feelings. I feel Buddhas are around us."

Ms. Chen saw posters about the DPA performance six months ago, and she has been looking forward to seeing the show ever since. "I am attending the DPA show for the first time and think the performance was really well done/ I truly have a predestined relationship with DPA."

She was also impressed by the perfect match of the costumes and the story portrayed, as well as the miraculous arrangement of the backdrop, musical compositions, and choreography. "The 3-D scenes in the dance drama 'The Poet's Vision' could never be seen in other dance troupes' performances. Figures walked out of the backdrop--it was really great. The design was very beautiful."

The folk customs presented in the Yi ethnicity's dance ["Dance of the Yi"] and Tibetan dance, and their gorgeous costumes also impressed her.

Ms. Chen thought that the integration between the music and the performers' dance postures was especially beautiful.

Ms. Huang, who in charge of Gaodengde Industrial Company, was impressed by the artists' strict and advanced training and outstanding performance. She feels that promoting Buddha Law through such art forms makes it easy for people to accept.

Ms. Huang was moved by the dance drama "Heaven Awaits Us Despite Persecution." She also understood that the show depicts the five thousands years of Chinese culture and brings the audience inspiration. "I feel it is very good that everyone keeps God in mind. When you're helpless, God will protect you."

Ms. Huang said happily, "I feel the Buddha's Fa in my heart."

Ms. Wang Yingchun, a painter, said that the DPA show made people feel relaxed. She said, "The dancers expressed themselves through their body language very well, and the dances made me feel relaxed. The tenor was fantastic. The vocalists' songs echoed in my heart."

The artistic presentation of the stage and the backdrop impressed Ms. Wang deeply. She said, "The effect was very special to me. In one act, figures came down from the backdrop and then came out onto the stage from behind the screen, or flying from over there. It gave a feeling of flowing."

Ms. Wang commented that the dances were a kind of "dynamic art." She commended the DPA show as having divine charm, the same as the name of the company.

Professor Ye said that the DPA show was totally different from ordinary performing arts shows. "It is very meaningful to present 5000 years of Chinese civilization," he added. 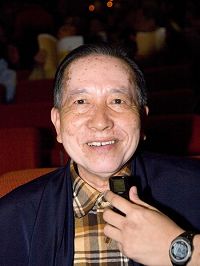 He said, "Few and far between have I seen such magnificent backdrops. The fairies in the show could even fly from the moon onto the backdrops, then onto the stage. The music was exceptionally good. The performances of the tenor and the alto were excellent."

As chairman of the International Alternative Medicine Research Institute and the honorary president of the World Federation of Chinese Medicine Societies, Dr. Ye pointed out, "With people nowadays suffering from the global economic turmoil, seeing the DPA show can calm their emotions and adjust their physical and mental condition."

He also emphasized the importance of the balance of "body, mind, and soul" in medical treatment. He said he really felt a strong energy field throughout the DPA show, especially from the giant Law Wheel in the last act spinning on the backdrop. "It was indeed spectacular. The energy was so strong that my heart seemed to be spinning as well. It was really very wonderful."