Mr. Xu Dawei, 35, is a practitioner from Yingermen Town, Qingyuan County, Fushun City, Liaoning Province. Before he was arrested eight years ago, Mr. Xu was a chef at a restaurant in Shenyang City, Liaoning Province, and was in good health. When he was released on February 3, 2009, his hair was gray, his body was covered with scars, he was emaciated, and he had developed a mental disorder.

Practitioner Mr. Xu Dawei from Liaoning Province (The picture was taken several months before he was arrested.) 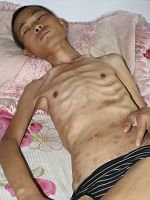 After eight years in prison, Mr. Xu Dawei was emaciated and had a mental disorder. He had many electric shock scars on his body.

After eight years in prison, Mr. Xu had edema in his hands and feet. His right knee and ankle had scabs. He had dark purple marks on his buttocks from necrosis.

Mr. Xu Dawei was sentenced to eight years in prison by the Heping District Court. He was imprisoned and tortured at the Shenyang City Dabei Prison, followed by the Lingyuan No.1 Prison, the Fushun No. 2 Prison, and the Shenyang City Dongling Prison.

The extent of Mr. Xu's experience in the prisons is unknown. The following are several known facts.

In late January 2003 in the Shenyang City Dabei Prison, Mr. Xu was beaten and locked in a small dark cell which was less than 43 square feet in size. The person responsible was Li Jianguo, the prison ward's head guard.

On October 29, 2003 in the Lingyuan No.1 Prison, Mr. Xu was taken to the "Strict Supervision Division." He was tortured there.

At least twice, while he was in the Eighth Ward of the Lingyuan No.1 Prison, Mr. Xu was locked in small cells. He was handcuffed and shackled for several months, and shocked with electric batons many times. The responsible person was Wang Liming, the Eighth Prison Ward's head guard.

As a result of the torture, Mr. Xu developed symptoms of pleurisy. Fluid filled half of his lungs.

About two years ago, Mr. Xu was transferred to the Third Ward of the Shenyang City Dongling Prison. He was beaten there. The people responsible were prison director Li Zhong and guards Hu Xizhong and Qi Jinglong.

For the past two years, Mr. Xu's family visited the prison almost monthly. Only on one occasion were they allowed to see Mr. Xu. All other times, their requests to see him were rejected, followed with ridicule toward Falun Gong, or they were told that Mr. Xu was under "strict supervision."

The single family visit happened on February 14, 2008. Mr. Xu was skinny but his mental state, his speech and his reasoning were all normal.

On February 3, 2009, Mr. Xu Dawei was released after eight years. The family was shocked when they saw Mr. Xu at the prison. His hair was gray, and he was emaciated, had dull eyes, and did not recognize his family.

Mr. Xu's chest and abdomen had many brown scars left from electric shocks. He had edema in his hands and feet. His right knee and ankle had scabs. His buttocks was dark purple from necrosis.

After he was taken home, Mr. Xu squatted against the wall and was too scared to move. His family kept telling him, "You are home. Don't be afraid." As time passed, Mr. Xu finally felt safe enough to sit on the bed.

After being taken care of by his family, in time, Mr. Xu was able to recover. Once he had regained mental coherence, he told his family, "The jail gave me injections of psychotropic drugs. They beat me with their fists and kicked me."