(Clearwisdom.net) The Divine Performing Arts (DPA) New York Company ended the tour in Ottawa on January 4. Four shows in three days attracted 8600 people. Mr. Li Xun, the chair of Falun Dafa Association in Canada--the organizer of the DPA shows in Canada, told the reporter that the four shows had an average 97.80 percent of the seats sold, and many people said that the shows were excellent and touching. 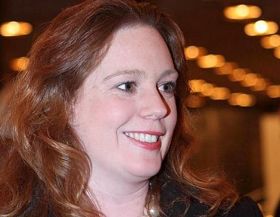 MPP Lisa MacLeod of Ontario said the show has a "double meaning": there's beauty and elegance on the surface and when thinking deeper, there's messages of "truth" and "divinity."

MacLeod said that when the performance is looked at in its entirety, "Whether it's the precision of the orchestra, the colors in the costumes, the magnificence of the soprano and the baritone, or just the sheer elegance of the dancers, and the combination of all that into a message of truth, and the ability to practice one's religion and their beliefs, and know, in all of that, that your good work in life will be rewarded even in the afterlife as the show tells you, it's something that I think was quite remarkable." 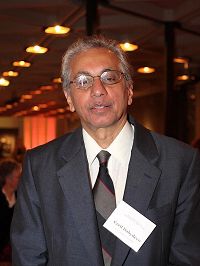 Award-winning Ottawa writer and poet Professor Cyril Dabydeen delighted those in attendance by reading his "notes" from last year's show, giving the highlights that he enjoyed best.
He praised the "great talent" on stage, especially noting the Chinese classical dance and the choreography.

"The dance has all the energy, the tumbling movements of the ancient past ... the joy of it, the quintessence of the various movements, male and female--the agility, the exercise of the men and the gracefulness of the women. It's just beautiful."

The combination of Chinese and Western instruments in the orchestra also delighted Mr. Dabydeen. "I think it's a very good idea because the world is becoming more hybridized. We live in a globalized world ... The whole world is changing so we can connect--it's a brilliant idea." 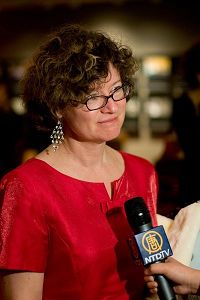 Ms. Rowe is a project manager for an association of dance companies across Canada that serves dance presenters' needs and supports their work with the dance community and its marketplace.

"I don't know a lot about Chinese classical dance but as a westerner, trained--I took some ballet myself--I can see that it is a highly classical form and that these dancers are very flexible, extremely graceful. Their arms are beautiful, you know, very nice balances, very good turns. It seems to be very, very well done," she said. 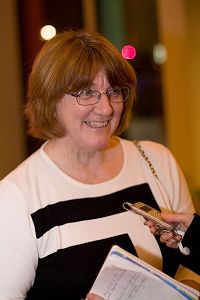 Ms. Coderre liked the costumes in the show.

Ms. Coderre, the chair of department of drama at Ottawa University, is particularly knowledgeable about set lighting and the interaction between the performance on stage and its background.

"I like it when there's a very close unity between the costumes and the background so that you have that sense of color and the color is included in the background," she said.

"They've managed to catch that nuance, I really enjoyed that," she said. "For instance, the costume that I enjoyed the most was the 'Flowing Sleeves' dance. The background had just the right colors in it to be working very well with that." 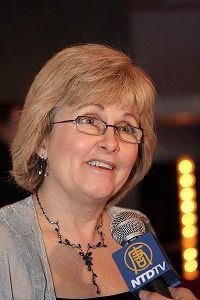 Ms. McKenna was moved by "Dignity and Compassion," a dance piece about Falun Gong, a meditation practice with roots in ancient Chinese culture which is currently being persecuted by the Chinese regime. 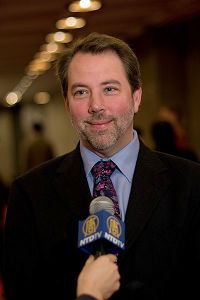 Mr. Armour, a principal cellist in a chamber orchestra

Mr. Armour, a principal cellist in a chamber orchestra and artistic and executive director of a chamber music society, enjoyed the unique DPA orchestra, which breaks new ground by combining Chinese and Western instruments, bringing together two of the world's greatest classical music traditions. Performances by solo musicians as well as sopranos, tenors and basses are also an integral part of the show. 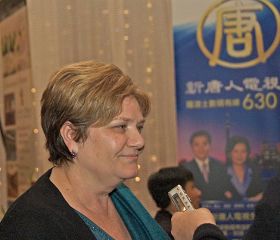 Ms. King, a theatre producer and event organizer visiting from London, said that the show was nothing short of "superb."

"It was tremendous. The visuals were absolutely tremendous. I thought the performances were superb, but I really thought that one of the best things was the costumes," she said.

"I thought it really crossed the divide very well. It was very understandable for Western people," said Ms. King.

As for the solo musicians, she found the performance by tenor Hong Ming "fantastic." His voice was "tremendous and absolutely different from anyone I've heard," she said. The backdrops are custom-designed to coordinate with the costumes, choreography, lighting, and storyline for each dance. "The link worked really, really well," said Ms. King. 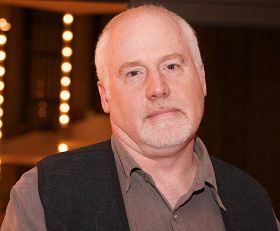 Alex Neve, an Officer of the Order of Canada and Secretary General of Amnesty International Canada

Alex Neve, an Officer of the Order of Canada and Secretary General of Amnesty International Canada attended and praised the show.

"Obviously there is a powerful message about the traditions of Chinese culture and the connections between cultural traditions of 5,000 years ago and the reality today," said Mr. Neve.

"There's an important message, I think, about the diversity of China and the fact that China is a nation made up of many cultures and many traditions, all of which need and should be celebrated. And there obviously was a stark reminder of the fact that in China there's another reality as well, which is human rights violations and persecution."

Neve pointed to the dance called "Heaven Awaits Us Despite Persecution" that told the story of a father who is persecuted for practicing Falun Gong.

"Human rights violations are widespread throughout China and it affects many people, but the abuses against Falun Dafa followers have been a grave concern for many years," said Mr. Neve.

"I think that that number was a powerful reminder that there's a very human cost to that issue. It's not just about politics, as we were reminded in that story when an individual is wrongly arrested and subjected to brutality, and torture, and ultimately death--it affects many people."

The last program of the show was the song "Knowing the True Picture Offers Ultimate Hope," which touched many people.

He added that "compassion and humanity are very uplifting" qualities in the show that impressed him. The "great message" of what he saw encompassed "great warmth and human spirit." The show "was extremely full of hope," he said.

The closing piece "about knowing the true picture of hope and human values were so transcendental for me ... inspirational."

"We see the Divine Performing Arts really and truly in action, the morality and the values of the past, which human civilization around the world should never forget and overlook, no matter how much materialistic progress you make.

Ms. McKenna said she could tell that "there's a deep spiritual element to the whole performance and I know it has been touching the hearts of many. The spirit of hope, the spirit of beauty, the spirit of the blessing that the Divine Performing Arts is bringing to the world through this performance is a fabulous gift to us."