Brooklyn Banker, "It's Like a New Future for China!" (Photo)

(Clearwisdom.net) Divine Performing Arts (DPA) Touring Company staged its first show in Brooklyn, New York on the afternoon of January 3, 2009. Audience members were amazed by the colorful performances, showering the highest praise on the show. 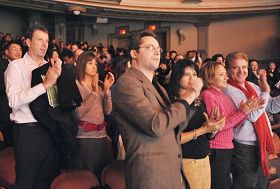 Salvatore Pane and his wife Andrea Pane, who are both bankers, attended the DPA show with Scott Nigro, a debt management and credit restoration specialist, and his wife Natasha, who also works in the banking industry.

The two couples were delighted to see the show and thought it was colorful and carried a timely message of hope and peace for mankind.

"Everything was Great but the Message was Even Better!"


When the reporter asked Mr. Pane what messages he took away from the show, he replied, "I think the show was beautiful and the message was even better than the show itself! There was a message of hope, a message of change--from inside of China--coming outside. They (Falun Gong practitioners) are looking for the good people to eventually prevail. And you can see by the tenor's words that Falun Gong people believe in what they are doing and they want to bring that message out of China."

"The message I received was from the death of the gentleman who was killed by the Chinese Communists. But then there were the gods who came and rescued him in the end, and brought the message of Falun Gong back again," he said.

He continued, "I liked everything about the show: The dancing was magnificent; the costumes were very well coordinated. The colors were unbelievable, and the life that they brought to the show was very, very nice. More importantly, like I said before, the costumes were great, everything was great but the message was even better than anything else!"

Mrs. Pane liked the brilliant colors of the costumes and the backdrops, saying, "I really enjoyed the show, it was very colorful, the gowns were impeccable, and it had a beautiful message of hope, compassion, nobility for the family, and respect for the old people, your parents."

She thought that the main message of the show, for her, was linked to the colors of every costume, in every performance, saying, "With the meaning of the green of hope and the pink and the green of the beautiful screen backdrop, and flowers ... it's like a new future for China!"

She ended by saying, "I think it is a beautiful show for the New Year, and it was a good introduction to Chinese culture in a different way. Because it shows the values of the Chinese culture, I enjoyed it very much."

"I Thoroughly Enjoyed It!"

Before attending the DPA, Mr. Nigro said he "didn't know what to expect" but after seeing the show he said, "I thoroughly enjoyed it! It was a wonderful show. I thought the dancers were graceful and had a great storyline. It was wonderful. They were very graceful."

He continued, "I enjoyed the women dancers when they first came out in the first half of the show, the ones who played the drums. They were so delicate, yet so fierce. I was very impressed by that."

The Band was Like "Butterflies Flying, They Were Lovely!"

The DPA show was the first Chinese performance that Mrs. Nigro had ever attended, saying, "It was fabulous. It was very, very good, very graceful. It had a lot about the Chinese culture in it."

She particularly liked the band, saying, "I loved them! They were like butterflies flying, they were lovely. And I liked the dancing in the second part. They were dancing like flowers, that's what I liked."

“I Am Teacher's Disciple and a Particle of Dafa”