San Diego Audience: A Salute to the Choreographer (Photos)

Beginning on December 26, 2008, Divine Performing Arts presented four shows in San Diego. The exquisite performances moved the audiences. Attendees expressed their feelings after the last show at the San Diego Civic Theatre on the afternoon of December 28, 2008, and they agreed that Chinese traditional culture was very profound.

Nick is a businessman, and he brought his family of five to the show. Their favorite performance was the dance, "The Udumbara's Bloom." They thought the dance was stunning and displayed the unlimited grace and blessings of the flower. Nick's daughter, Nicole, said, "I loved that dance about the Udumbara flowers; it was so elegant!"

According to the Buddhist Sutra, Udumbara flowers blossom every three thousand years. The last time they blossomed was more then 2500 years ago, and it was prophesied that the next time would be when the Holy King, who turns the wheel, descended to the world. In the past several years, the Udumbara flowers have bloomed in many countries all over the world, announcing this important message. 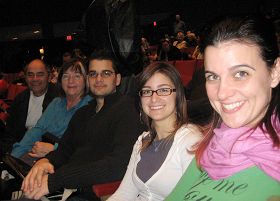 Nick's wife, Anne, also mentioned the dance, "The Udumbara's Bloom." She said, "I liked the dance about Udumbara flowers blooming once every three thousand years because I liked the inner spiritual meaning."

Nick's son, Panny, used to be a dancer. He said that his favorite performance was also "The Udumbara's Bloom."

Nicole runs a dance school and choreographs many dances. She enjoyed seeing so many dancers move simultaneously. She sighed, "The dancers were all in harmony and all so pretty... I don't know if my words are enough." She continued, "Their costumes were very pretty, simple but pretty, and very graceful. The dancers were all very lively as well. Their facial expressions showed that they were all very devoted, and I liked that very much."

Anne agreed with Nicole, saying that the costumes were very pretty, for they were very classical and simple yet very beautiful. She especially noted the performance in which a man was persecuted while sitting in meditation but ascended to heaven in the end. "I cried. This is a very nice show, and I like the spiritual inner meaning that manifested."

The younger daughter, Athena, said, "The costumes were very beautiful, the choreography was perfect, and the music was smooth and calm; wonderful. We liked it very much."

Speaking on spiritual enlightenment, Nicole said, "The spirit displayed by the dancers' wisdom and skill moves the audience. I obtained spiritual hints, not just from the costumes, but from many other aspects as well."

Anne said she witnessed the loss of Chinese classical dance, as many Chinese traditions have been westernized. "I am so happy to see Divine Performing Arts recover Chinese traditional dance and music."

At the end, Nick said excitedly, "The show was great, very traditional, and colorful. The scenery was beautiful. Divine Performing Arts should keep hosting this show because several thousand years of traditional heritage has been lost. China, like other countries, is losing its traditional culture."

Biologist Byron and his wife Shirley watched the last show in San Diego on December 28, 2008. Byron said, "I experienced a wonderful calmness through Divine Performing Arts; it was very positive and uplifting." 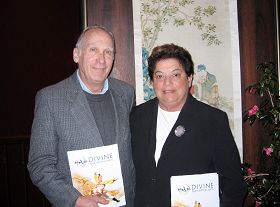 Biologist Byron and his wife Shirley

The couple could not stop praising the performers. Shirley is a retired elementary school principal. This was her first time to see Divine Performing Arts, and she felt that everything was superb. She said, "The Divine Performing Arts show is absolutely mighty and graceful, for the mythology, fairy tales, dances, costumes, backdrops, music, and everything was exquisite. It was simply too good to be true. I was totally enchanted by it. The most important thing is that I now see the value of traditional culture through the show, and it makes one optimistic and full of hope."

Byron added, "It was like we were watching the Olympics" and Shirley agreed, "We watched the 'Arts Olympics.' All aspects of the performance perfectly harmonized together."

Mr. Han Qing is a biological researcher. He immigrated from China about six years ago. He thought it was very precious to be able to watch the Divine Performing Arts show overseas, for the program contained traditional Chinese culture. He said, "It's difficult enough to get such a chance, yet the show also manifested very deep and transcending Chinese culture in a simple and fresh way. The delicate grace in the choreography and the costumes we have never seen before seemed to be extracted from classical Chinese culture. The performance was so different from the shows I have seen in China. I enlightened very deeply to the meaning of Chinese mythology and the lasting appeal, humanity, and culture. I felt so good!"

He especially liked the dances which displayed traditional Chinese culture: heaven and man in harmony. He said, "The choreography of the dances and costumes was very good, for it was something new, especially in the individual performances." Mr. Han really enjoys traditional Chinese culture, "The more we bring out our culture, the more people will learn how beautiful, rich, and grand it is."

He added, "I want to acknowledge the choreographers. I admire how they have produced such a wonderful show in the U.S. environment... Also, the costume design had a divine sense to it, and that matched the company name: Divine Performing Arts. I saw a very high-class show, top of the world."