At 8 p.m. on December 30, 2008, the Divine Performing Arts (DPA) International Company performed its first show in the Pasadena Civic Auditorium in Los Angeles. 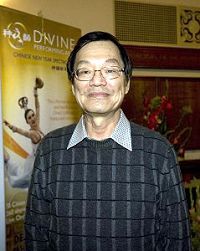 Li Mutong, Head of Taiwan Daily, said after seeing the first show in Los Angeles, "I liked the show very much. Promoting Chinese culture in the form of art is very appropriate.

"I see the DPA show every year and enjoy it very much. The dancing is very good. So are the costumes and backdrops."

Mr. Li especially mentioned the dancing in "The Udumbara's Bloom." He said, "The dancers made great efforts. Their gestures were gentle and beautiful. The backdrops were very nice, and the costumes coordinated well. It is a very good program. I enjoyed it very much."

Regarding the program that referred to Falun Gong, Mr. Li pointed out, "In current society of freedom and democracy, such a persecution should not be happening. The Communist Party's totalitarian control of China is a hindrance to China's development. China's economy has progressed on the surface, but it is based on the overuse of resources and contamination of the environment. The development of a society needs to safeguard moral values and protect the environment. China needs to make progress in these areas."

Mr. Li said several times, "It is inconceivable that the CCP would persecute Falun Gong. Falun Gong has no enemies. It should not be persecuted.

"Chinese culture belongs to all Chinese people. It is very appropriate for DPA to promote it in art performances."

Director of the Los Angeles Branch of the All Chinese Democracy Federation: Promoting Chinese Culture in art is commendable

Chen Guochang, Director of the Los Angeles Branch of the All Chinese Democracy Federation, brought his daughter to the show. 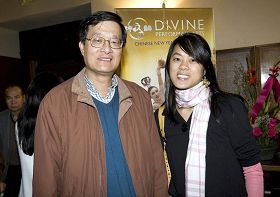 Chen Guochang, Director of the Los Angeles Branch of the All Chinese Democracy Federation, brought his daughter to the show

"I sat in the front row and saw everything clearly. Each performer was sincere and very committed. I was touched."