(Clearwisdom.net) Famous Chinese writer Sheng Yue is a big fan of the Divine Performing Arts (DPA). She has not missed any DPA shows in Toronto. She even drove to New York once to watch a DPA show. 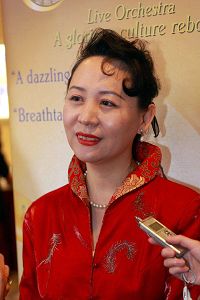 On January 11, Ms. Sheng attended the DPA show in Toronto. She told the reporter, "The show not only restores the traditional Chinese culture and exposes the truth to the Chinese people, but also creates a new culture."

"It creates a new culture," she said, "and offers us a new cultural environment, a new way to think and a new enjoyment. Actually, if we want to get rid off the communist culture, we must have a new culture. Only in this new culture can we eliminate the old stuff. So, I think it is important that the DPA gives us such a new culture."

Sheng Xue believes that the DPA show not only restores the traditional culture, but also clears away the communist culture.

Speaking of the anti-persecution program in the show, Sheng Xue is glad that the show offers people a chance to know the truth about the persecution of Falun Gong. "Only after people know the truth, can they make the right decision," she said.

"To Chinese people, it is very important to know the truth," she said. "I believe that most people are just and kind. They have simply been deceived by the Communist Party, or threatened by them. They don't have a chance to learn the truth. After being deceived for a long time, some of them give up their right to know the truth."

Sheng Xue came to the show with a Chinese friend who came to Canada not long ago. He didn't know anything about the 10-year long persecution of Falun Gong. "So, letting people know the truth is the first step. The second step is for people to make the right choice," she said.

She expressed that the DPA show helps people to break through the communist "fog," and see a new and different world than the communist culture.

Sheng Xue said that the Chinese Communist Party (CCP) has been trying very hard to promote the communist things in Western mainstream society. "When Westerners see the bad things in the Chinese society, they develop a bad impression of Chinese people," Ms. Sheng said. "The DPA show not only offers a chance to the overseas Chinese people, to enjoy their own culture, but also gives Westerners the chance to know what real Chinese culture is."

"In fact, many Westerners highly evaluated the show after watching it. It helps them to see the real China, which is different than the one they see through the communist culture," she said.

“Police Covertly Cremated the Remains of Mr. Qian Shiguang, Who Had Been Severely Injured (Photo)”