, During Helsinki's "Art Night" on the evening of August 22, 2008, practitioners held activities in Esplanade Park to raise awareness about the persecution of Falun Gong in China. 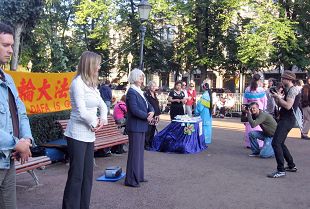 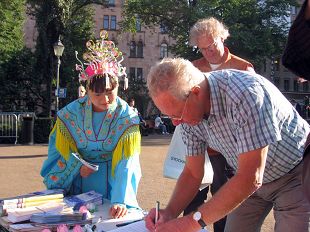 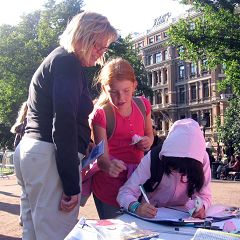 Passersby sign a petition held to stop the persecution

Practitioners hung up an attractive "Falun Gong Is Good" banner in the park and collected signatures supporting an end to the Chinese Communist Party's (CCP) persecution of Falun Gong. Several young female practitioners wore beautiful, ancient Chinese clothing as they distributed information leaflets and folded paper lotus flowers to the passersby. Several people were interested in taking pictures with practitioners.

It was a bustling night in the park, but although there were various arts and cultural activities, when people saw the Falun Gong banners and the practitioners demonstrating the five exercises they couldn't help stop to watch and learn more about it. Many people took leaflets or asked for details. After learning the facts about the persecution, many wanted to sign their names to stop the atrocities.

The practitioner said, "CCP officials are inhumanely stealing the organs of living Falun Gong practitioners to earn huge profits and are cremating the bodies to hide the evidence."

“Germany: Activities Calling for the Resumption of NTDTV's Signal to China (Photos)”

“Cultivating Oneself While Saving Sentient Beings”