Denmark: Raising Awareness about the Persecution of Falun Gong on July 20 (Photos)

Now on this day every year, practitioners around the world gather together. They use every kind of means to tell the people in the world about the merciless persecution that has been happening in China and demonstrate the goodness of Falun Gong. 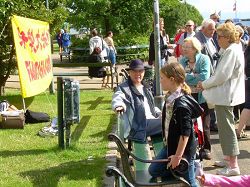 Tourists learn about the persecution 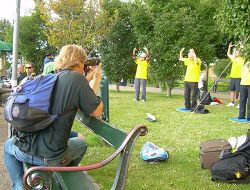 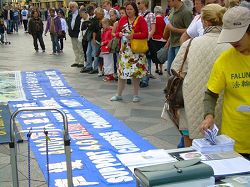 People in the busy street stop by and read the materials 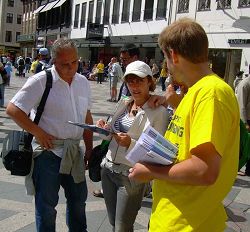 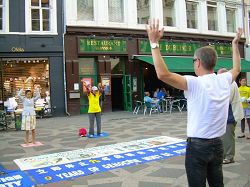 Practitioners protest in front of the Chinese Embassy 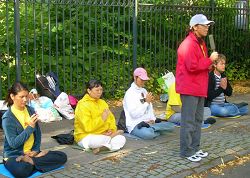 In the early morning, practitioners wearing yellow T-shirts arrived at Copenhagen's most famous attraction, a statue of a Mermaid. They laid out a banner reading "Falun Gong is Good" and demonstrated the Falun Gong exercises on the meadow near the statue. The Mermaid represents Copenhagen and is a must-see for tourists from all over the world. The tourists packed the area, going around in every direction. The banner immediately drew the people's attention. Lots of tourists were attracted by the peaceful demonstration of the Falun Gong exercises. Lots of them took flyers out of curiosity and read them in a hurry. Some could not hold the urge to raise their cameras to take pictures of this special event.

There were also some tourists from Mainland China who, at the beginning, dared not to take the leaflets. But they listened quietly to the practitioners explanations. Gradually, everybody accepted the information and left in the end with a leaflet.

In the afternoon, practitioners went to the busiest pedestrian street in the city centre. There were not just banners with the words "Falun Gong is Good", "CCP must stop the nine years genocide immediately" and "Support forty million heroes quitting the CCP", but also plenty of photos introducing Falun Gong and exposing the persecution by CCP. The tourists stopped one after another to view the photos. After learning the truth about the persecution, lots of them put their names on petition forms.

Passers-by were attracted by the peaceful exercises and the music in the background. A Swedish tourist standing in front of the practitioners, who was doing the exercises, started imitating the practitioners' movement while watching carefully.

Denmark practitioner Ms. Wu said in her speech, "Today we are gathering here without hatred but with sorrow in our hearts. After passing through the 20th July 1999 the darkest date ever in history, we come here to the Chinese Embassy, which is also the CCP's overseas fortress. We are here to speak loudly, stop the CCP's persecution of True, Good and Endure. We are coming for you too. As the members of the Chinese Embassy, over the nine years, you all witnessed the persistence of Falun Gong. You all witnessed Falun Gong's non-violence. You also saw Falun Gong practitioners' goodness and peacefulness, their reasoning and tolerance. You are living outside China. You know more about the liberty and respects for human rights in the democratic society than people inside China. You can draw the right conclusion that who is right, who is wrong through your own independent reasoning."

"Now, more and more people in China are quitting the CCP and its affiliates. Forty million heroes have set themselves apart from CCP. They have secured themselves a safe future."

Danish practitioner, Ms. Bao, who had been jailed unlawfully and had suffered cruel persecution in China for three years, could not hold back her deep concern for the members of the Chinese Embassy. She stood out twice to speak to them in order to make them awaken to the truth, and to stop aiding the CCP do evil as it marches toward its demise.