The annual Independence Day Parade in Philadelphia was held on Benjamin Franklin Parkway at 6:00 p.m. on the 4th of July. The Falun Gong group, along with sixty-six other groups participated in the parade. It was the seventh time that Falun Gong practitioners were invited to join this event. 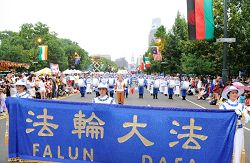 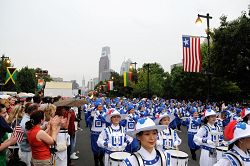 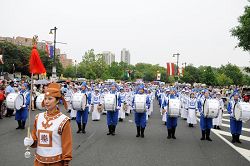 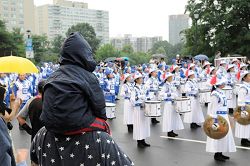 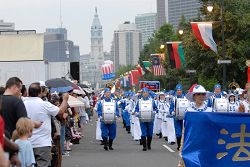 The Divine Land Marching Band, consisting of more than 100 Falun Gong practitioners, has performed in this parade twice. This year, they wore the newly made traditional Chinese Song-Dynasty style costumes, which are in blue and white. The bright color and excellent performances attracted many spectators.

Many people, especially the Chinese people, took photos of the band. Several young Chinese talked about uploading the "Falun Gong photos" to their websites. Many Chinese people discussed if the costumes were Tang Dynasty style or Song Dynasty style. Some Chinese tourists were shocked to see practitioners in America.

Mr. Zhu, a reporter from the newspaper China Daily, expressed that the Falun Gong group's performances were excellent. He took a lot of photos. He said he would publish them in his newspaper. Several Chinese people told practitioners that they are glad to see them in the parade each year, and their costumes this year are very pretty. A Chinese lady told a practitioner that she knows the truth about the persecution of Falun Gong, because one of her neighbors in China has been persecuted for practicing Falun Gong. She took truth-clarifying materials from practitioners.

The members of the Divine Land Marching Band performed at the Independence Day Parade in Washington D.C. in the morning, and they took a bus to Philadelphia right after the parade in D.C.

In front of the stage, the band performed "America the Beautiful." Practitioners hope that one day Chinese people will enjoy the freedom in China like American people in the U.S., and that one day Falun Gong practitioners can freely practice in China.