(Clearwisdom.net) On June 9, 2008, the Human Rights Law Foundation held a press conference at the National Press Club in Washington DC on the Chinese Communist Party (CCP) instigating thugs to attack Falun Gong practitioners in the U.S. 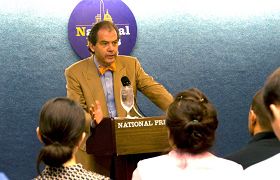 Former diplomat Mark Palmer is shocked by the Flushing incident 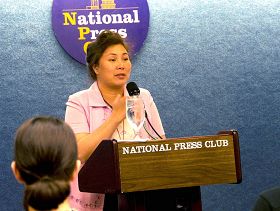 Ms. Judy Chen recounts her experience of being assaulted and receiving a death threat 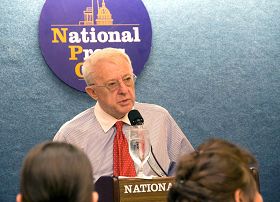 Michael Horowitz, Director of the Project for International Religious Liberty at the Hudson Institute, a Washington think tank 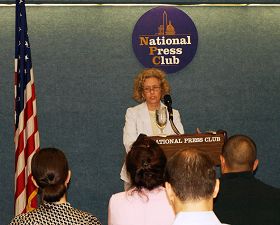 Former diplomat Ambassador Mark Palmer pointed out the unprecedented nature of the CCP's actions, including physical attacks, death threats and intimidation on U.S. soil. Several speakers called for the FBI, the State Department and other government agencies to step in.

A video was shown at the press conference about CCP-directed thugs attacking Falun Gong practitioners in Flushing, NY and a recorded telephone conversation between a WOIPFG investigator and Chinese Consul General Peng Keyu.

Ms. Judy Chen, who was a victim of the attacks, recounted how she was assaulted and the target of a death threat. She asked, "Are we in China or in the U.S.? How could such a thing happen here in the U.S.?"

Mr. Mark Palmer served in policy positions in the State Department in the Nixon, Ford, Carter, Reagan, and the first Bush administrations, including launching the National Endowment for Democracy. He stated, "I do not recall at any time during the Cold War that the Soviet Union and the Communist Party of the Soviet Union ever did this sort of stuff inside the United States. ...they never tried using physical violence and threats of death to intimidate the Americans. This is really unprecedented what the Chinese Communists are trying to do. And I think it is important we understand that it is really a fundamental threat, this is not something that involves only the Falun Gong."

Ambassador Palmer noted that the Chinese Communist embassies and consulates and other resources have threatened cable companies in the U.S., and American scholars engaging in the study of China issues are also widely intimidated. They were afraid that they would not get visas to go to China if they wrote critically and honestly about the situation in China. Even some human rights and democracy advocacy organizations in the U.S. are intimidated by the CCP and forced to dissociate with Falun Gong. Many large U.S. corporations that do business with China are subjected to such intimidation, as well. Some city councils in the U.S. have been pressured into forbidding Falun Gong practitioners to participate in parades and other such cultural activities.

Ambassador Palmer said, "For the last four to five years, I have regularly had harassing phone calls that originated in China at various times through the night to keep me awake. During Thanksgiving last year, between 2:00 a.m. To 10:00 a.m. in the morning, I had 23 harassing phone calls. They feel that they are able to do anything in this country, including threating people with death."

Mr. Palmer said, "We have to realize that there is a law in this country. The FBI, the State Department and administration have the responsibility to intervene."

Terri Marsh, Executive Director of the Human Rights Law Foundation, stated that as long as the CCP is in power in China, it will pose a serious threat to the national security of the U.S., which is an issue that Americans cannot afford to ignore.

Ms. Marsh explained that the Flushing assaults are not merely a national security issue. When Beijing incited thugs to assault Falun Gong practitioners, it was an assault on the most fundamental principle upon which the U.S. is based, the freedom of religion.

Mr. Xia Yiyang, a representative of the World Organization to Investigate the Persecution of Falun Gong, talked about the CCP's control over overseas Chinese.

He said that the Chinese embassies and consulates directly control Chinese community associations, associations of Chinese students and scholars, and other organizations and provide them with funds. The CCP organizes overseas Chinese community leaders to receive training in China every year, and many overseas Chinese media have become a mouthpiece for CCP propaganda.

Michael Horowitz, Director of the Project for International Religious Liberty at the Hudson Institute, a Washington think tank, stated that once the recorded telephone conversation of Peng Keyu is verified by the FBI, Peng should be immediately expelled from the U.S. Mr. Horowitz also requested that the American government immediately take action.

“Validating Ourselves Is the Enemy of Group Cooperation”

“By Reciting "Falun Dafa Is Good," I Recovered From a Stroke”