The Human Rights Torch Relay, initiated by the "Coalition to Investigate the Persecution of Falun Gong" (CIPFG) arrived in Kuala Lumpur, the capital of Malaysia on May 25, 2008. 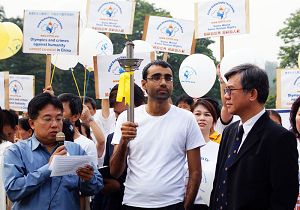 N. Surendran, representative of CIPFG in Malaysia holds the torch 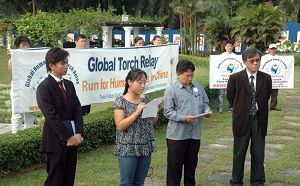 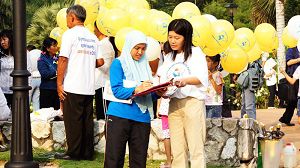 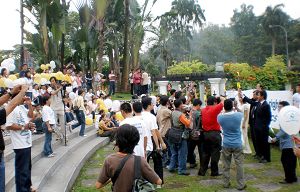 The Human Rights Torch was lit at 9:30 a.m. Three ladies dressed as Greek Goddesses held the torch, walked to the rally venue, and handed it to lawyer Yang Yongjian.

Human rights lawyer Yang Yongjian, who represented the Malaysian Bar Association Human Rights Committee, attended the rally. He sternly condemned the Chinese Communist Party (CCP) for harvesting organs from living Falun Gong practitioners. He said it is a crime that seriously violates human rights. He said, "In human society, we often hear all kinds of allegations, but today's charge concerns human lives. Facing such an allegation, we cannot ignore it. Therefore, I call on international organizations concerned about the safety of human lives to actively facilitate various activities to help people learn about the true situation."

"Moreover, responsibility and transparency are also very important. I hope the government that is faced with the allegation of live organ harvesting can be more open. I also call on (China) to immediately stop all organ transplant operations, and then discuss how the allegation should be handled. Otherwise, this issue will be unable to be solved. If we remain silent, or deny it, the allegation will have to be extended."

Yang Yongjian continued by saying that if the allegation is extended, it will involve the question of humanity and human nature. The Olympics co-exists with humanity. All of the world's people who come to participate in the Olympics must uphold the spirit of peace and humanity, like a big harmonious family. We cannot tolerate that some groups are suffering hardships, while some other groups pretend nothing has happened, and happily come to participate in the Olympics.

Mr. Yang ended his speech by saying that the Human Rights Torch Relay is a very meaningful activity, and he represented the Malaysian Bar Association Human Rights Committee in wishing the activity success.

Offering Salvation to the People Persecuted by the CCP

N. Surendran, who represented the CIPFG, said in an interview, "I'm honored to participate in this activity, because it is a sacred activity with a sacred aim, that is to offer salvation to the people persecuted by the CCP, [including] not only Falun Gong, but also other persecuted groups and dissidents. I'm very glad that this event can be held successfully, and I believe that the event will help the whole world clearly see to what the CCP is doing."

N. Surendran continued, "The IOC and other international organizations have seen that since the CCP obtained the right to host the Olympics, whether or not it has improved or lessened human rights violations. No! Even worse. The CCP suppressed the Tibetan people because it will hold the Olympics. It pressured governments of countries around the world to stop all protests during the relay of the Olympic torch. The CCP has not at all given any indication of repentance..."

The Beginning of Righteousness and Awakening

Overseas Chinese student Liu Xiaojia is from Changsha, Human Province in China. She recounted how her parents were arrested and detained by the CCP because they practiced Falun Gong, and she has lost her parents' caring and their financial support. She urged the CCP to immediately release her parents, and called on people to pay attention to the CCP's atrocities in persecuting Falun Gong, and help stop the inhumane persecution.

Mr. Peng, a businessman working in the construction field, supported the Human Rights Torch. He said in an interview, "I'm glad to see the Human Rights Torch arrive in Malaysia. I hope the relay can be passed on. It is an event that reflects righteousness, and also an awakening and self-reflection of overseas Chinese. It is the beginning of awakening, helping overseas Chinese see clearly the CCP's deeds."

Mr. Lin from Serdang, who is in RELA, Malaysia's volunteer reserve, said, "The Human Rights Torch Relay is an event that can showcase human rights. Human rights do not have distinction of nationalities or races. If people cannot speak out their thoughts, there are no human rights. I am very sad for the persecution of Falun Gong. But the Human Rights Torch is here, and we can help them (the persecuted Falun Gong practitioners)."

Mr. Lin concluded, "What is important is that we are not against any government, we view things from human rights' point of view, I hope everybody can support us in passing the Human Rights Torch to Malaysia and the whole world."

“Ms. Zeng Suqiong and Ms. Wang Yufeng Die as a Result of Persecution”