From March 25 to April 6, the "Truthfulness-Compassion-Forbearance" International Art Exhibition was held at the Chi-an Town Public Library and then at the Songyuan Exhibition Center, both in Hualian County, from April 9 to 23. The Department of Culture, a water company, and Hsiung-long Company in Hualian co-organized the exhibition with the Falun Dafa Association in Taiwan.

The exhibition displayed 40 art works that demonstrated the beauty of Falun Gong and exposed the brutality of the persecution. 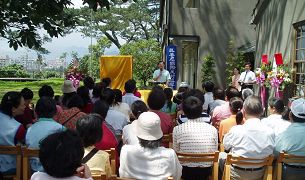 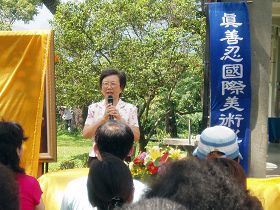 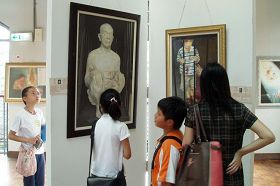 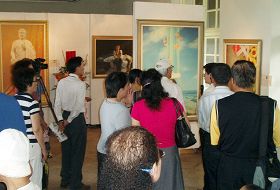 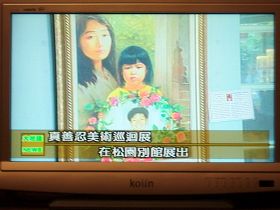 reported on the exhibition. 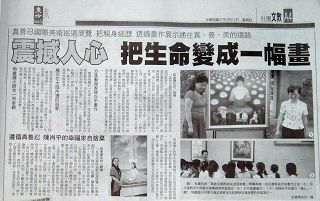 Tungfang Newspaper reported on the exhibition.

Many local government officials, college professors, and local artists attended the opening ceremony of on April 9. Several guests gave speeches. Mrs. Wei Chengmei, the secretary of the county government, hoped that more people would learn about the beauty of Falun Gong through the exhibition. Mrs. Liu Meichen, the representative of the county culture department, said that she sensed the positive "Buddha energy" at the exhibition. Professor Wang Tingsheng from Tunghua University had hopes that the art exhibition would bring the power of justice and "Truthfulness-Compassion-Forbearance" to every corner of the world.

Students from Mingyi Elementary school came to the exhibition as a moral educational activity. Students learned about the moral standards of Falun Gong and how it is being persecuted in China.

“Chinese Teacher in Brisbane: "The Spectacular Is Amazing" (Photos)”