Chinese American: "I Have Never Seen Such a Large-Scale Chinese Show" (Photo)

"Wow, so many young Chinese dance performers. Where are they from?" Jessica is a Chinese-American teacher. Her husband, Grayer, is a scientific researcher. They live in different cities. Grayer saw the message about the Chinese New Year Splendor in the New York subway. He booked the tickets and invited Jessica, who is living in Boston, to come to the show. 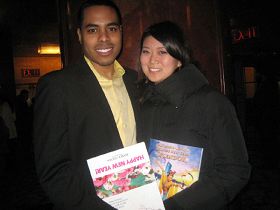 Grayer and Jessica said that "Lady of the Moon" touched them the most, because the story is close to their current situation

After the show, they said that they identified with "Lady of the Moon" because it reflected their current situation. They were impressed by the host and hostess' humorous way of explaining and introducing the programs, and they were very interested in the dancers who were about their age.

Jessica learned to dance when she was young, so she was very impressed by the dancers. She said she had seen some Chinese performances, but never on such a large scale. She thought the dance performances today were "spectacular." When she was told that all the performers were overseas Chinese from New York, she said that they must have had solid training in the fundamentals.

Grayer thought the design of the state-of-the art backdrops was very original, and he was struck by the red sickle on the wicked policemen's clothes that symbolized the Communist Party. They both have learned about the persecution of Falun Gong in China, and regarding the message about Falun Gong conveyed in the performance, he said, "We think this is an important message, because it is part of the real China."

“Happiness Happens the Moment You Set Your Mind Right”