New Tang Dynasty Television's Chinese New Year Splendor, performed by the Divine Performing Arts, will be staged at the Radio City Music Hall, 1260 Avenue of the Americas, New York City, on January 30-February 9, 2008. On the occasion of the Chinese New Year Splendor, Governor M. Jodi Rell of the State of Connecticut wrote the following letter to extend warm greetings and best wishes. 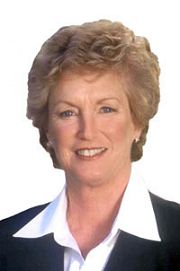 Governor M. Jodi Rell of the State of Connecticut

On behalf of the State of Connecticut, it is my great pleasure to extend warm greetings to the viewers of New Tang Dynasty TV and everyone gathered for the 2008 Chinese New Year Splendor.

I commend all of the participants and performers in the 2008 Chinese New Year Splendor. This is a special occasion, which reaffirms the beauty and importance of traditional values and Chinese culture heritage as an integral part of American multicultural society. I also wish to thank New Tang Dynasty TV for striving to enrich people's knowledge of Chinese heritage and culture and to provide the opportunity for a greater understanding between Western and Eastern societies.

It is a privilege to extend my words of tribute to all. Please know that you have my best wishes for a memorable occasion. 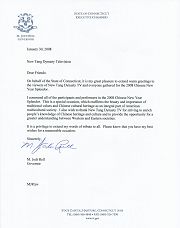 “New York City Council Member Domenic Recchia: "How Fortunate We Are to Be Able to Enjoy the Splendor of Ancient China and Celebrate the Chinese New Year"”

“Ren Wanting: No Matter How Many Times I Watch the Show, I'm Always Moved to Tears (Photo)”