The Hsiluo Bridge Cultural Festival was hold from September 22 to 24 in Yunlin County, Taiwan. The organizers invited the Divine Land Marching Band, practitioners' waist drum group, and the Tianyin Chorus to perform at the opening of the festival. 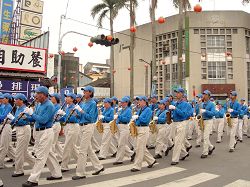 Divine Land Marching Band performs at the opening of the festival 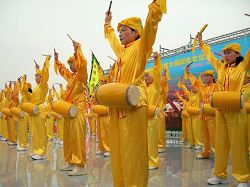 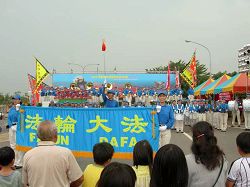 The eighth Hsiluo Bridge Cultural Festival was held by the Yunlin County government and Hsiluo Town government. The purpose was to demonstrate and promote traditional Chinese culture and art.

Hsiao Tsewu, the mayor of Hsiluo Town, expressed his appreciation to practitioners. One of the spectators said: "This is my first time to see such a band. I felt the righteous energy in their performance. Falun Gong is great."

One gentleman said: "Tianyin Chorus's singing is very touching, and the waist drum performance was also very encouraging and impressive."

One of the organizers said that Falun Gong practitioners' performance manifested the beauty of traditional Chinese culture and helped to promote the cultural festival.

“Dallas, Texas: Rally to Support the 26 Million Chinese Who Have Quit the CCP (Photo)”

“The Miracles of Dafa”