(Clearwisdom.net) The performances of the visiting Divine Performing Arts from New Tang Dynasty Television (NTDTV) displayed the content of pure compassion and pure aestheticism and enlightened the people of Tainan City to a new trend in art. A common remark from the audience was that the performance was "a feast for mind and spirit."

Director Chu Ruishiang of the Oriental Performing Arts Troupe: This is like a teaching from God or Buddha 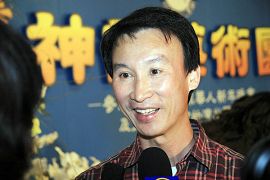 Mr. Chu Ruishiang, the Director of the Oriental Performing Arts Troupe, said, "I have heard people saying they (Divine Performing Arts) is very good, but I was skeptical. Today I watched it myself and I am very surprised. There is no need to comment on the singers. They are superb. The songs are like voices from the heavens, like birds singing in the valley. They are of the best professional quality. As for the dancers, individually, a few of them perhaps are not of top quality level, but the choreographer is very talented, resulting in the whole dance being very moving. The troupe is very cohesive, they are very devoted. Even though the movements are simple overall, it is very moving. I am really moved. The performance unites techniques and internal spiritual understandings. This is my first time to see such performances in my life. It is great!"

"Even the style is peaceful - like the high tone drum beats displaying a peaceful aestheticism. These dance movements make audiences feel very pleasant. We have learned a lot (from Divine Performing Arts) today. We shall create more art performances modeled after this direction, more arts that combines both spiritual meanings and techniques. For example, the stories about Loyalty, Truthfulness, Compassion and Forbearance can purify people's hearts and make audiences happy and comfortable, like listening to a teaching from gods or Buddhas. The Divine Performing Arts has made a very positive contribution." 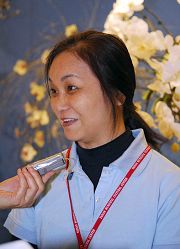 Being a dance educator of over 20 years, Mrs. Huang Qianyi is now a volunteer at the Musical Library in Tainan City's Cultural Center. After watching the first performance by the Divine Performing Arts in Tainan City, she accepted an interview with tears still in her eyes. "The candlelight vigil performance moved me most. I felt that little girl was very good. I am very moved."

"The little girl's dance is very good and she is also very generous. I am very moved. Another character is like her mother. The two characters supported and cooperated with each other. It is very good."

She also praised Qi Xiaochun's Erhu performance. "She performs so well. When she was playing Erhu, ..., the feeling is so true, I can't describe it with human language."

She also commented on the dance, "Herding on the Mongolian Plains" which depicts scenarios of young men riding horses on the plains. "It is hard for young people who grow up in North American to understand that kind of feeling. Especially when they bent down backwards, the audiences applauded."

Expert of Mini-Landscapes: Divine Performing Arts Mix the Realistic and Spiritual with Glory 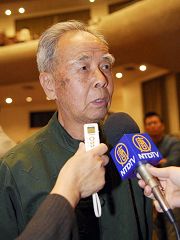 Famous expert of mini-landscapes Mr. Ma Jingshou watched the Divine Performing Arts performance in Tainan. Ma, nick-named "Old Man of Tree and Rock," is well known for his creations of mini-landscapes with a style like Chinese traditional paintings. He said, "Today's performances are very impressive. I believe it is very good to display traditional culture with stories and dancing. I liked all the performances. Some of them are realistic and others are spiritual. For example, 'Yue Fei's Loyalty' is a real story, but the huge background picture is more about the spiritual aspects since you can't perform (the war) on stage. I think this is a very good method and truly displayed the spiritual meanings. I like the spiritual part more." 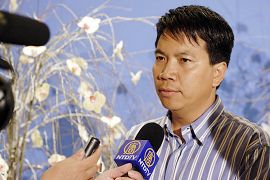 "The most impressive performance to me is the beautiful voice of Alto Yang Jiansheng. The background screen looked real so it gave the audience a real three-dimensional display. It is beautiful both audibly and visually." He continued, "The performance 'Resounding Drums' combined drum music into the 'tao of drum.' The men represented the strong and positive; and the women represented soft and beautiful. As a combination of strong and soft, it produced a very pleasant feeling. (We shall) continue this spiritual trend, for Chinese culture and also for peace. In promoting principles like compassion and cultivating one's heart the art enters people's hearts."