Malaysia: Building a Bridge to a Wonderful Future (Photos)

Malacca is a famous tourist spot in Malaysia. Every year, many Chinese tourists come to Malacca during the Chinese New Year. Beginning on the second day of the New Year, Falun Gong practitioners from Malaysia went to Malacca to clarify the truth and promote the Nine Commentaries on the Communist Party for one week. 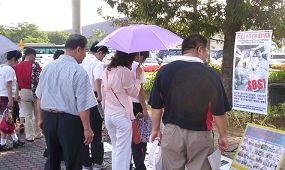 Tourists are learning the facts of Falun Gong and the persecution

Many tour guides were shocked and angry about the Chinese Communist Party's (CCP) harvesting organs from living Falun Gong practitioners. One of the guides asked for many copies of the informational materials and passed them out to the tourists. Another guide said to practitioners: "Thank you. Keep it up." When some tour guides asked how they could help, the practitioners told them that they can clarify the truth to the Chinese tourists, because the Chinese people have been deceived by the CCP's lies.

Many Malaysians were shocked by the CCP's brutality. Most of them read the truth-clarifying display boards and signed their names to support the practitioners. A young woman who works at a store helped practitioners to collect many signatures from her co-workers and friends.

There were many policemen at the tourist spot. After learning the truth of the persecution, many of them signed their names to support the practitioners.

Several Chinese tourists accepted the truth-clarifying materials, and some even quit the CCP with the practitioners' help.

One day when practitioners were passing out materials, a beautiful rainbow appeared. Falun Gong practitioners hope that the truth will be a beautiful bridge for people, like the rainbow, to a wonderful future. 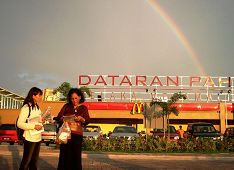 A beautiful rainbow appeared as practitioners were clarifying the truth