(Clearwisdom.net) At 2p.m. and 7p.m. on March 3, the Divine Performing Arts Troupe of New Tang Dynasty TV (NTDTV) presented two Chinese New Year Spectacular shows at the Auditorium Theater in Chicago--the last city that the Spectacular will visit in North America. Despite the snowy weather, nearly 7000 people came to see the Spectacular. Portraying the profound traditional Chinese culture, the Spectacular captivated the hearts of the audience and collected rave reviews. 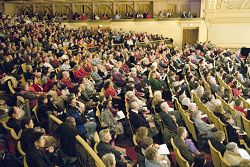 The show began with the grand dance, "Creation." In the opening scene, heavenly beings gather. Looking down at our world, a Buddha conveys that he will go to earth and bring goodness to humankind, inviting the others to join him. He then appears in the Tang Dynasty as an emperor. Many consider the Tang dynasty Chinese history's golden age, and believe its culture was divinely inspired.

After the Show, many people said that "Creation" deeply impressed them:

Nurse Susan said: "I liked the first piece 'Creation' as I feel that this portrayed the true human history. The theme of this piece is very lofty, and the costume, dance and music are just wonderful. All together, it was very powerful." Susan also watched the 2006 NTDTV Show.

Ms. Wu is from a Chicago suburb and works in an international company. She said: "I watched the DVD of the NTDTV 2006 Chinese New Year Gala, and one of my friends told me that it is a much different experience to watch the Show in a theater. So, here I am. After the first half, I feel that it is very rewarding. The Spectacular is very pure and bright. I think that 'Creation' is a novel piece and opened new horizons for me."

Mary and Stephanie drove 3 hours from Milwaukee to watch the Spectacular. They said that "Creation" impressed them the most and acknowledged that people from all over the world have belief in heavenly beings.

For Janet, this was her first experience with the NTDTV Chinese New Year Spectacular. She said that the performances were beautiful and entertaining, providing many messages. "Those stories [portrayed by the dances] are great," she said. She added that she liked the story "that Buddha came to the human world" the most.

The richest legend in traditional Chinese culture is cultivation, respect for nature and piety to heavenly beings. The dance "A Dunhuang Dream" portrayed a sculptor who attempted to complete 1000 sacred statues and was short of ideas after completing a dozen. Due to his piety, in his dreams he received divine inspiration to continue.

Ms. Zhang from Chicago said: "I liked this piece very much because it is very encouraging. With the melody, the dance was very touching."

In just two hours and 15 minutes, NTDTV presented the audience with the loyalty of Yue Fei, the courage and filial devotion of Mulan, the elegance and refinement of Manchu ladies, emphasizing the traditional Chinese values such as paying homage to Buddhas and Gods, respecting heaven, loyalty and filiation.... From "Forsythia in Spring" which portrayed the blooming flowers with frolicking movements and bright costume to "Herding on the Mongolian Plains" which depicts the strength of men under a vast sky, from "Rainbows" which presented a great match of strength and elegance with high spirits as boys and girls waved colorful ribbons to the "Dai Ethnic Dance," which reflects the beauty of Dai minority girls and the scenic mountains in their hometown. Every piece was delightful and entertaining. Warm applause sounded again and again from the audience.

The Spectacular visited a total of 14 cities in North American, attracting more 90,000 people. With a variety of dances and vocal solos, the NTDTV 2007 Spectacular portrayed traditional Chinese values such as paying homage to heavenly beings, harmony with nature and loyalty. In addition, the Show also featured several pieces which revealed the truth of the persecution of Falun Gong in China:

"So Vast are heaven and earth;
Whither do people go?
Lost, the way is obscured,
It favors neither rich nor poor.
But there is a way out-
Quickly find what is true

The song urges everyday people to look for the truth of Falun Gong, and expressed Falun Gong practitioners' view of the world and their compassion to all beings.

In the "Candlelight Vigil", dancers lit candles to commemorate Falun Gong practitioners who have been persecuted to death by the Chinese Communist Party and to symbolize their determination to raise up children orphaned due to the persecution. When interviewed by a Minghui reporter, Ms. Brown said: "I almost burst into tears. The performance was so touching. From the music to the dance, it was great. As a Christian, I can fully understand the contents which portrayed heavenly beings and cultivation. All this is to teach people to be good."

One marketing professional brought his girlfriend to watch the Spectacular. He said that he liked "The Loyalty of Yue Fei" the most while his girlfriend favored the female dancers. When asked his opinion on "Reaping What Is Sown" which depicted the universal principle that "Good will be rewarded with good and evil will meet with retribution", he said that he knew some facts of the persecution of Falun Gong. When he went to his company's branch office in New York, he saw practitioners' anti-torture exhibition in Manhattan.

"It is very unfortunate that the persecution is happening in China. Falun Gong is a peaceful practice. People are being persecuted and even tortured to death just for practicing. Those pieces reminded me of the reality of the persecution."

Another gentlemen drove more than 50 miles to watch the Spectacular. He said: "I feel very happy. Really, the show, especially those songs, made me feel very bright. Though I can't understand Chinese, I knew the lyrics were telling some stories, of which I shall learn more details."

At the VIP reception before the Spectacular, many elected officials commended the show for its world-class performance and expressed their respect to people who are devoted to promoting traditional human values despite hardships. Chicago 3rd district Senator Mattie Hunter wore her favored Tang attire to attend the reception. She said that she has been serving as the district senator for Chinatown for many years, and that her love for China is no less than that of Chinese people. In particular, she likes the traditional Chinese New Year because of the love, sharing and care demonstrated by people during this period. She expressed her support and gratitude for the Chinese New Year Spectacular, realizing that it is very difficult to organize such a large show outside China.

Christina attended the reception on behalf of Joseph Moreno, the 7th district commissioner of Cook County. She read a support letter from Mr. Moreno and condemned the Chinese Communist regime's infiltration into the U.S. She said: "Every group has the right to express what they want, especially this elegant gala which represents authentic culture." In his letter, Mr. Moreno wrote:

"One of the strengths of our country is the protection we afford our citizens of their fundamental rights, such as freedom of speech, religion, assembly and press. The diversity upon which our country was built and thrives compels us to stand by our fellow citizens in their effort to maintain their cultural identity.

Last year, I was pleased and honored to be able to introduce a resolution to the Cook Country Board, which was unanimously approved, that recognizes the right of Chinese Americans to withdraw their membership from the Chinese Communist Party, and I intend to continue to represent the interests of all the citizens in the 7th District and in Cook County."

Thomas Cheng, director general of the Taipei Economic and Cultural Office in Chicago also expressed his admiration for the Spectacular. He said that it is very admirable for overseas Chinese to host such a large event independently to promote Chinese culture, and no one should interfere with the event.

Ms. Jiang from Chicago has 50 years experience in dance. After watching the Spectacular, she said: "The show is great! No political color, very profound, true Chinese culture. I am a choreographer and directed classic dances such as Mulan and Yue Fei in the past. However, I have to say that the Divine Performing Arts Troupe presents real world class art. The Spectacular presented a vast variety of programs, from ethnic minorities' modern lives to highlights of the ancient Tang and Qing Dynasties. The performers portrayed true Chinese culture. I sincerely admire their achievement and I am very proud."

Evidently, the Chinese New Year Spectacular has not only brought people entertainment and hope, but also inspiration. For many of them, "Buddha came down to save sentient beings" is no longer just a legend. While the North America tour of the Spectacular has drawn to a successful conclusion, people's exploration of high level beings, and mankind's past, current and future is perhaps just beginning.