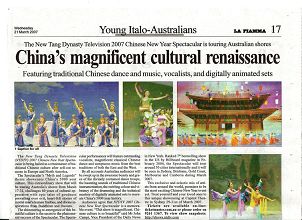 The New Tang Dynasty Television 2007 Chinese New Year Spectacular is being hailed as a renaissance of traditional Chinese culture after sell-out seasons in Europe and North America.

The Spectacular's "Myth and Legends" theme showcases China's 5000 year culture. This extraordinary show that will be touring Australia's shores from March 17-31, challenges 60 years of cultural oppression with epic tales of goodness prevailing over evil, heart-felt stories of mortal man's human frailties, and divine inspirations from Buddhism and Daoism.

The shimmering re-emergence of this beautiful culture is the secret to the phenomenal success of the Spectacular. The Spectacular performance will feature outstanding vocalists, magnificent classical Chinese dance and sumptuous music from the best traditions of both the East and the West.

By all accounts Australia audiences will be swept up in the awesome beauty and grace of the divinely costumed dance troupe, the haunting sounds of traditional Chinese instrumentation, the swirling colour and vibrancy of the drumming and the technical mastery of digitally animated sets to recreate China's 5000 year history.

Audiences agree that NTDTV 2007 Chinese New Year Spectacular is a memorable event. "This show is magnificent. Chinese culture is so beautiful" said Mr. John Campi, Vice President of the Daily News in New York. Ranked 7th bestselling show in the US by Billboard magazine in February 2006, the Spectacular will tour around 30 cities internationally and it will be seen in Sydney, Brisbane, Gold Coast, Melbourne and Canberra during March 2007.

This exclusive and eclectic mix of artists from around the world, promises to be the most exciting Chinese New Year event yet. Treat yourself and your loved one to this unique showcasing at Capitol Theatre in Sydney 29-31st of March 2007.

“Eliminate the Evil from Its Root”