(Clearwisdom.net) There is an unrelenting tide of Chinese people quitting the CCP and its affiliated organizations. Rallies supporting the 20 million Chinese people that have already quit are being held around the world. The CCP's tyranny has been marked by fighting, hatred, killing, war, hunger, lies, and terror. Over 80 million Chinese people have died due to persecution by the CCP. The persecution of Falun Gong initiated by the CCP and Jiang Zemin in 1999 has brought about the darkest age in Chinese history and enraged the heavens and kindhearted people. Heaven's destruction of the CCP is imperative. 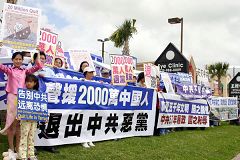 In Houston's Chinatown, the rally "Support the 20 million Chinese People That Have Quit the CCP" is eye catching

From March 24 to April 8, 2007, rallies to support the 20 million Chinese that have already quit the CCP are being conducted by the Global Service Center for Quitting the Chinese Communist Party, The Epoch Times, Sound of Hope radio, and NTDTV in most major cities in North America. On March 24, a rally held in Chinatown in Houston began the nationwide effort. Falun Gong practitioners participated in the event.

The gathering was held on the public lawn in front of the Dingh Hao Supermarket from noon to 2 p.m. Various banners, such as "20 Million Chinese Quit the CCP" and "Quit the CCP, Stay Away From Fear," were especially eye catching. The street was very busy during the noon hour and the event drew many people's attention. Speakers from the media and other circles delivered speeches to expose and condemn the CCP's crimes.

The reporter interviewed some Falun Gong practitioners at the event. Mr. Huai's entire family practices Falun Gong. He said: "Heaven is eliminating the evil CCP. This is Heaven's will. Heaven will eliminate it. All the members of the CCP, the Communist Youth League, the Young Pioneers, and other related groups are targets to be saved. I myself was a CCP member for more than four years. I learned a lot of truth and renounced the CCP once I read the "Nine Commentaries on Communist Party". We have been cheated by the CCP's party culture on many things. We really hope that people in China can read the Nine Commentaries. Just check out if it's all true and recognize the CCP's nature soon. Otherwise, the time and opportunities will slip away. Don't be sacrificed for CCP."

Falun Gong practitioner Mr. Yang shared his personal experience. "I am from Taiwan. My parents left Mainland China for Taiwan in 1949. In comparison with the Mainland, Taiwan ensures freedom of belief. But on the Mainland, the CCP persecutes Falun Gong and other beliefs. We think that we should step up and come out against the persecution. We came to attend the rally today because we find it particularly meaningful. In Mainland China, the CCP has been in power for over 50 years. The people there have no freedom of belief. Falun Gong practitioners are brutally persecuted for no reason. But since The Epoch Times published the Nine Commentaries on Communist Party in November 2004, the Chinese people have started to wake up. China can only be truly changed after the Chinese people recognize the evil nature of the CCP. The rally is to support the people in China that have quit the CCP. Today the number of people who have quit will reach 20 million and will continue to increase."

Ms. Cheng from Austin said: "The reason I came to the rally all the way from Austin is that there is a Chinese Consulate here in Houston. I have noticed that many have been afraid of the Consulate and the CCP for many years, because they are concerned that their family or relatives in China will be implicated if they tell the truth and support the movement to quit the CCP publicly. We want to stand up bravely and attend the rally to support those 20 million Chinese that have already quit. It could be an encouragement to more people and help more to stand up and join the wave of quitting the CCP. The righteous field would then be expanded. The CCP is nothing. Heaven's destruction of the CCP will definitely happen."

The CCP has committed crimes for over 50 years and severely damaged China's 5000-year-old traditional culture. The Party culture is a shackle that locks up Chinese people's minds and spirits and causes great suffering. It runs counter to the will of divine beings and does not respect heavenly rules and morality. In particular, the CCP persecutes righteous belief and Falun Gong practitioners who believe in "Truthfulness-Compassion-Forbearance." The CCP encourages Chinese people to denigrate "Truthfulness-Compassion-Forbearance" and puts them into a devastating situation. The CCP will be punished.

The tide of "Quitting the CCP" reflects the Chinese people's increasing awareness of this truth. Heaven's destruction of the CP is inevitable. We hope that Chinese people look for the truth as soon as possible and quit the CCP. If they do, they can survive the disaster and have a beautiful future.