(Clearwisdom.net) After touring more than ten cities in North America, New Tang Dynasty TV's (NTDTV) Chinese New Year Spectacular returned to New York City and staged the first of the seven scheduled shows on the evening of Feb. 14, 2007. The two-hour-and-fifty-minute show captivated the audience in Radio City Music Hall by its display of the profound Chinese traditional culture.

Guillermo Linares, Commissioner for the Mayor's Office of Immigrant Affairs, told the reporter that the show was a perfect combination of beautiful dance movement, colors and music. Congressman Edolphus Towns thanked NTDTV for all it has done. 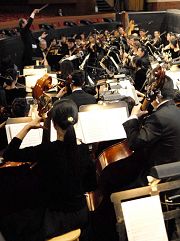 More than fifty artists of orchestra

Following the Holiday Wonders performance, NTDTV presented a hearty New Year greeting to New York with the Chinese New Year Spectacular. The show had three themes: To show the Buddhas' salvation of sentient beings, to spread the traditional virtues of Chinese cultivation culture and to express good wishes with traditional dance. 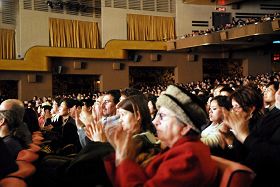 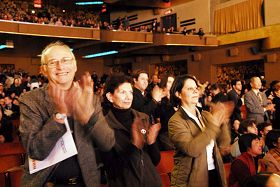 The audience at the end of the show

The show started with a large-scale dance, "Creation." The scene showed splendid heaven and the Tang Dynasty in prosperity. The compassionate Master Buddha led gods and goddesses to the mortal world and created a beautiful future for the sentient beings of the universe. Singer Guan Guimin's song "Chakravartin" called to sentient beings not to miss the salvation they had been waiting for. Singer Yang Jiansheng's song "Compassion" was about the compassionate salvation. Singer Bai Xui's song "Auspicious Words" expressed heartfelt greetings. Jiangmin's song "Why Do I Refuse?" called for valuing lives. The dance "Candlelight Vigil" was to commemorate the Falun Gong practitioners who have lost their lives to clarify the truth about Falun Gong in order to save people. It called for justice and conscience.

Cultivation is at the heart of Chinese culture. The dance drama "Reaping What is Sown" and "The Monk Who Endured" highlighted the spirit of cultivation.

"Reaping What is Sown" told the story of a Falun Gong practitioner who was killed by persecutors but achieved Consummation and returned to Heaven. The persecutors were cast into hell.

"The Monk Who Endured" told the story of an abbot who adopted the baby of an unwed girl, but was wrongfully accused. However, the abbot didn't argue on his behalf. He raised the child and bore the humiliation while doing good deeds. Eventually, the real father of the child became the country's top scholar. He came back to marry the girl and took back their child. The abbot achieved Consummation because of his virtue.

The dance "Mulan" told the story of the well-known heroine. Her story of joining the army in her elderly father's place embodies loyalty and filial piety.

The show created a fresh look based on traditional dance to show the beauty of people and nature. The joyous "Forsythia in Spring" showed the spirit of Spring with the movements of handkerchiefs. "Rainbows" spread the happiness with dancing ribbons. The beautiful dancing girls of Dai Nationality created great harmony with nature. In "Herding on the Mongolian Plains," brave and heroic young men rode horses on the vast grasslands of Mongolia.

The closing performance was one of drums, a traditional Chinese music instrument. The powerful war drums symbolized the righteous spirit, courage and greetings of the Chinese New Year.

On the day of the performance, winter storms hit the Eastern United States and Canada. As much as six inches of snow accumulated in New York. Several thousand viewers, including local political leaders, consulate officials of other countries in New York, artists, and New York residents watched the show in spite of the weather. 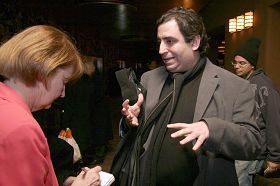 Director Paul Catafago of "The Source is One", a non-profit organization, praised the show

Director Paul Catafago of "The Source is One", a non-profit organization, said that the show was rich with a variety of programs and was as good as any show on Broadway.

Huang Manyu, Secretary of the New York Chinese Freedom and Democracy Association, enjoyed the show very much. She said that for so many years, there was no such creative performance in China. Having lived in a Western country for so long, those of Chinese descent naturally enjoy Chinese traditional culture, and the NTDTV Spectacular brought it to the people.